The creepy, spooky, mysterious and kooky animated sequel The Addams Family 2 will be getting its DVD and Blu-ray UK release date in the not too distant future. It’ll still be on in cinemas into December 2021, but if you’re looking ahead at the home entertainment release, here’s everything that we know so far.

It’s obviously a fairly significant divergence from the old school original TV series that inspired the film, as well as its 1990s big screen live action adaptations, but it’s done enough to secure a second film, so it can’t be doing too badly. It comes on the back of the success of other animated series like Hotel Transylvania, so if you like your cartoon flicks on the monster side of the spectrum it could be a good one for the collection.

The story for the second film is that Gomez and Morticia think that Wednesday and Pugsley are growing up, so they plan a huge cross-country road-trip to get their unique style of family bonding back on track. They all jump into their funeral wagon camper van and hit the highway on a quest for wild adventures and explosive memories that will last them a lifetime or two.

With the film still playing in cinemas, it seems unlikely for The Addams Family 2 UK DVD and Blu-ray release date to be confirmed, but in the global COVID-19 pandemic world we live in all bets are off. It has now been confirmed to arrive for home entertainment on the 10th January 2022. It arrived in cinemas in early October 2021, so looking ahead from there it should be have been set to come out end of January 2022 or early February, but there’s definitely a new norm forming for the physical formats.

If it had stuck to the previous setup, it would have given it a a good shout for the half term holidays in the UK, which is towards the end of February 2022. However, following a few other anomalies with DVD and Blu-ray release schedules in recent months it will now be on the hunt for the early New Year spend where gift vouchers come into play.

The closest example of a shorter release window is Shang Chi and the Legend of the Ten Rings, which came out in cinemas on the 3rd September 2021 before going on to arrive on DVD and Blu-ray on the 15th November 2021. In all fairness, that was probably linked to the arrival of iMax for Disney+, which came out the weekend beforehand, but it appears as though its a similar story with The Addams Family 2.

The other example is No Time To Die, which crunched the timelines to get home entertainment out in time for Christmas 2021. All of this could be linked to the new streaming market with Amazon Prime, Netflix and Disney+ all vying for supremacy using film releases to leverage subscriber numbers.

We’ll update you with more details on the film as they get confirmed. You can also check out our movie news section to keep tabs on the latest upcoming films, or visit the Eternals movie website at https://www.marvel.com/movies/the-eternals.

Going on the usual release schedule for the US, it should come out on DVD and Blu-ray in January 2022, making it one of the earliest animated home entertainment feature for the year. It doesn’t look as though there’s going to be a 4K version of the film in the US, which is often the case for smaller animated films.

Don’t forget to follow us on Twitter to see more news and updates on upcoming home entertainment releases, and you can also see more on the film in the run up to the release with the official Universal Pictures Twitter page at https://twitter.com/universalpics.

We’re pretty big fans of the original series and 90’s movies, so The Addams Family 2 always had a lot to live up to, but it’s definitely good to see more from the much-loved characters. The style of the character artwork doesn’t always work as well as it could do with Gomez jarring the most in terms of his look, but there’s more than enough to the film as a whole to compensate for this.

It’s also fair to say that the animated films have a lot to thank the Hotel Transylvania series for, which helped to light the touch paper for the more monstrous crop of family movies. But equally, there probably wouldn’t have been a Drac, Johnny and Mavis if it weren’t for Gomez, Morticia, Wednesday, Pugsley and the rest of the family, so it’s easy to look past the similarities.

Perhaps the best thing to say about the film is that it has the little ones in hysterics for the vast majority of it all with Pugsley and Uncle Fester making up most of the best laughs. Javon Walton has done a pretty good job of replacing Fin Wolfhard as Pugsley and Nick Kroll is easily as good as he was in the first film as Uncle Fester.

In fact, the whole cast does a very good job of bringing the characters back to life and the road trip story line is a smart move for the sequel, giving it a lot of space to build out the crazy. The Addams Family 2 will definitely get a lot of re-watches, especially with the summer hols and Halloween links, so either the DVD or Blu-ray is going to be a pretty solid investment for family animated film fun.

We’ll update you with more details on the film as they get confirmed. You can also check out our movie news section to keep tabs on the latest upcoming films, or visit the Universal Pictures website at https://www.universalpictures.com.ystudios.com/. 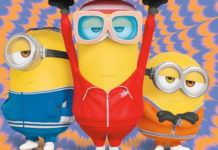