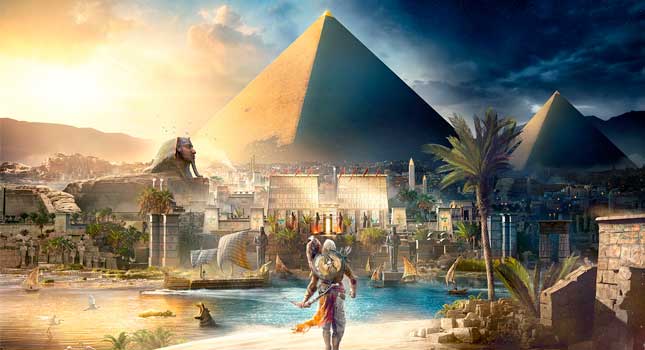 Though the game had been rumoured way before E3 2017, it was at the Xbox presentation right at the start of the huge gaming event that Assassin’s Creed Origins had its big reveal and release date confirmation. It’s been a couple of years since the last game in the series saw Evie and Jacob Frie taking on the might of Victorian London in Assassin’s Creed Syndicate, and this time around we’ll be going back to the very beginnings of the Templar vs. Assassins struggle.

It all kicks off in Egypt during the Ptolemaic rule of the Kingdom after the death of Alexander the Great. In and among the pyramids, mummification and Nile cruises, the organisation we now know of as the Templars or Abstergo Industries is in the process of striking the first tail sting blows to control society. Luckily, for the rest of the free thinking world, a new force will come into existence to oppose them, raising the first hooded counter attack against wide-scale oppression.

The Assassin’s Creed Origins UK release date has been confirmed for the 27th October 2017, which will see the game launching worldwide. It’ll be available on Xbox ONE, PS4 and PC. With a two year break since the last game in the series in 2015, and the origin story concept, it should feature on a fair few wish lists, and if previous games in the series are anything to go by it could well get a major price drop around the holidays later in the year.

The protagonist for the game is Bayek, a Medjay protector of the people who discovers a sinister controlling force sweeping throughout his homeland. As he digs to find out more and tries to stop the oppression of his people, he comes face to face with an organised enemy group that calls for a new resistance to hold back their power over civilization. 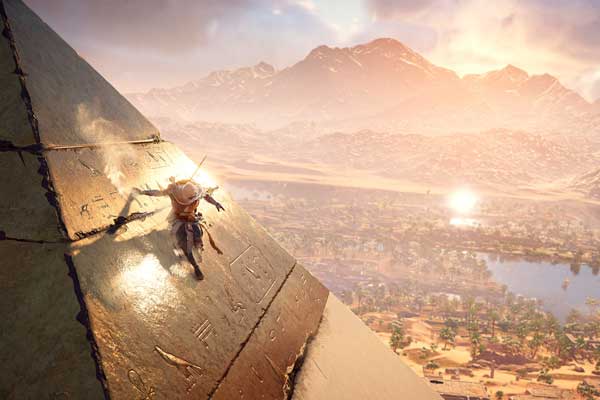 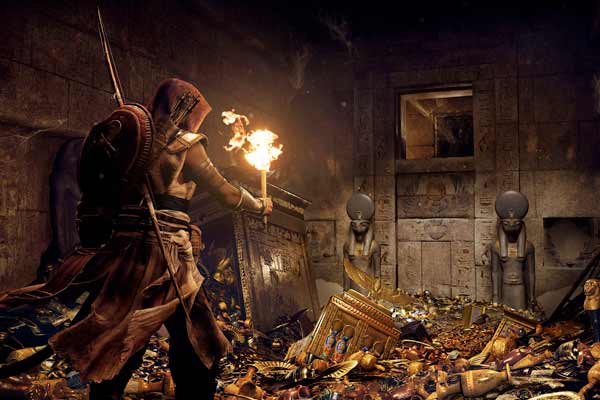 The third person action adventure and stealth concept of the series is inevitably back once again in Assassin’s Creed Origins with Bayek’s movements looking slightly more archaic. He still has the same parkour capabilities as in previous games in the series, so he can still scale buildings and skip from tree to tree with ease, but he’s more manful in his actions, which feels appropriate for the origin story behind the game.

The other big new addition to the way that you approach fortifications or enemy stronghold is that you have an eagle called Senu to send in to scout out the environment. This is a lot like the drone setup from Tom Clancy’s Ghost Recon Wildlands, where you can tag enemies, set markers and pinpoint assassinations before entering.

There’s less emphasis on getting to high vantage points to unlock the map of the landscape with Eagle vision, which is kind of understandable considering you have your own eagle to scope things out. It makes for a subtle introduction to the mystical element of the game and with talk of gods, the appearance of a giant snake at the end of the reveal trailer and the ongoing Pieces of Eden storyline, this could be the most fantastical game in the series.

The fighting system has evolved a little in Assassin’s Creed Origins with much more emphasis on free movement, including dodges, ducks and parries. This will come in handy with the addition of powerful bosses to fight at key points in the game. The weapons are also a little different with more long range spear and axe weapons and a lot of focus on archery with a variety of bows to find and arrow moves to dish out the damage from afar.

The slow motion arrow shot that you can see Bayek doing in the gameplay trailer is pretty cool with shades of The Legend Of Zelda: Breath Of The Wild, and the multi-shot capabilities should be a lot of fun to use. There’s also a guided arrow move towards the end of the main sequence in the gameplay trailer, which adds to the mystical element of the game.

Levelling up in the game is achieved by picking up XP from killing enemies, so you’ll be able to build up your capabilities organically as you progress through the missions and quests. Enemies have different levels, so you’ll need to watch out who you tackle early on. Taking on a level 22 guard when you’re just setting out on the adventure will more than likely see you getting cut to pieces, so you’ll need to be more judicious about who you get into a fight with.

There is no trade system to buy weapons like in Syndicate or Black Flag. Instead, you’ll pick new equipment up from fallen enemies, putting much more emphasis on looting as you go.

As you can see from both of the trailers, Assassin’s Creed Origins has a massive open world to explore as the games puts in a lot of effort to recreate Egypt in its entirety. Travelling such vast distances will be by horseback, camel or boat with the Nile river and its tributaries open for exploration and travel to the south.

There are a lot of wild animals throughout Egypt and, as ever, they can pose as much of a risk to you as the Templars. Huge hippos and crocodiles command the waterways, so whether you’re swimming on the surface, walking along the edge of rivers or diving beneath the water you could find yourself having to fight for your life or run like the wind. There are also lions, leopards and elephants to keep an eye out for, so it’s going to be pretty ferocious out there.

With all of the new additions and gameplay enhancements, Ubisoft has clearly put a lot of effort into developing the game in a bid to take away some of the negative criticism games in the series have received. The freedom of movement in the fighting and the huge open world are pretty exciting prospects, but we’re less convinced by the mystical gameplay mechanics like the scouting connection with Senu and the guided arrow shot.

There’s always been a scientific structure to the more fantastical elements of the game in the past, so it’s possible that the narrative will go on to explain the mysticism in a similar way in Origins. If not, then it could go on to be a negative criticism for the direction of the game, but we’ll have to wait for the release date to come around to see for ourselves.

Assassin’s Creed Origins has been given an age rating of 18 by PEGI, so you should expect a lot of blood letting, assassinations and brutal fighting.

The majority of the trailers that have been released are on the 4K gaming power of the Xbox ONE X, so they look very impressive. Details are crisp and intricate, and draw distances are vast with a lot less popping objects than we’ve seen in the past. However, if you play the game on the standard PS4 or Xbox ONE then you might want to lower your expectations slightly.

Either way, there’s clearly going to be a lot of visual treats throughout the game, no matter what console iteration you play it on. The environment variation is pretty cool with the old world Egyptian cities giving way to deserts, oasis, rivers, savanna and even mountains. The weather is mostly hot in the land of the Pharaohs, so there’s not much variety in terms of conditions. As a result, the game focuses instead on the effects of the sun with reflections, shimmers, flaring and haze being used to bring the sprawling open world recreation of Egypt to life.

While the gameplay developments and stunning open world are very exciting, we’re less thrilled by the setting of Egypt or the timeline of the game during the country’s slow downfall and overseas control. It’s just not as cool as previous locations and timelines like Victorian London or the pirating world of the Caribbean. It’s not the most engaging timeline in the country’s history either, so it feels like it could be a missed opportunity.

Assassin’s Creed Origins looks like a game that takes itself very seriously, which is a shame because the light-hearted fun of Syndicate was very enjoyable. Heading back to the beginning with a po face is a bit of a disappointment, if we’re being honest, so the new action gameplay and stunning environment are really going to need to compensate a lot for the underwhelming setup.