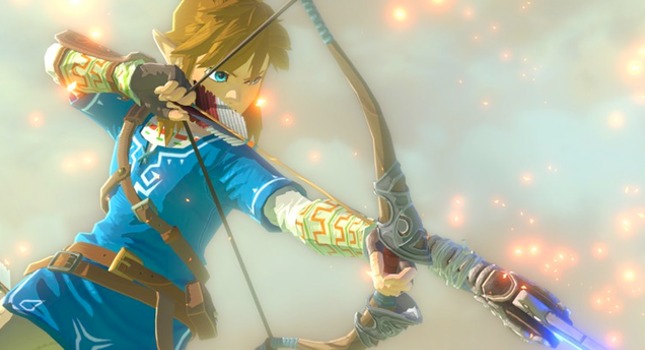 It might not be the game we all saw and fell in love with at E3 2012, but Nintendo is finally getting around to it’s first new Legend Of Zelda game for the Wii U and from what we’ve been lucky enough to see of it recently it looks incredible. However, the time it has taken to develop the impressive open world title means that it has managed to hold out for the release of the new console, the Nintendo Switch, so The Legend Of Zelda: Breath Of The Wild will be getting a dual release.

Using the same cel shading style of Wind Waker in its HD Wii U form, it’s shaping up to be the big release of 2017 and while details were thin on the ground initially, the unveiling at E3 2014 and the subsequent arrival of the trailer and gameplay demo has given us a lot to go on in terms of the direction the game will take. With the addition of the Nintendo Switch dual console genius into the equation, it means that Breath Of The Wild will also be a hand held title too, so you’ll be able to play it wherever you go.

While it was initially slated for some time towards the end of 2015, the game has now been confirmed for the launch window of the Nintendo Switch, which is due in Spring 2017. If we’re honest, we don’t think we’ll get a release until we get close to Easter at the very earliest, but as soon as we find out when the official UK release date is, we’ll update the details here first. You can also follow the Nintendo UK Twitter profile for the latest tweets on the game’s upcoming release on the Wii U and Switch consoles.

The full storyline details for the game haven’t been officially announced yet either, but if our experience of The Legend Of Zelda games has taught us anything it’s that we should be fully prepared for a resurgent Ganon, a Hyrule in distress, Triforce to find and a princess to rescue. What we do know for sure is that we’ll be taking over a slightly older link character similar to the one in The Legend Of Zelda: Ocarina Of Time, as opposed to the more youthful version in The Wind Waker. He’s also been asleep for a hundred years for some reason and now he’s being summoned to wake up to find the Kingdom no more than crumbling ruins teaming with enemies.

The Legend Of Zelda: Breath Of The Wild trailer:

In terms of gamepay, it’s looking like Ocarina of Time and Majora’s Mask are the framework for the battle and movement aspects of the game, but with a lot more sophistication in terms of how enemies attack. Each has its own style and weaponry, so you’ll need to adapt your fighting strategy accordingly, switching things up as you go. It’s the Zelda equivalent of adapting your moves and fighting approach in Street Fighter II, which should give the game a lot of challenge.

It’s also been confirmed that the game will have an open world style of gameplay by the guys at Nintendo, and you can see from the trailer below that there are a few blurred lines between The Legend Of Zelda and Assassin’s Creed games. Describes by Nintendo as a “vast Zelda world, without boundaries” and with references to being able to make it to distant mountains by game developer, Eiji Aunuma, it’s clearly going to be a large and sprawling game that goes beyond the disparate island concept of Wind Waker.

This is a new dawn for Link and he’ll have a massive environment to roam around in with a lot of emphasis on discovery and exploration. He has a few new moves up his sleeve to be able to get around this new Hyrule effectively and the biggest development is that he can now climb up walls and cliff faces. This come in handy when trying to get to hidden treasure up on high or down in a precipice, but you’ll also be able to use it to get to vantage spots to see what the terrain ahead looks like or to identify points of interest to get to using your telescope, as well as climbing up to high passes to travel to new areas.

Once you’ve made it up to the top of a ruin or mountain region, there are a couple of cool moves you’ll have to be able to get down fast. The first is the para-glider, which allows you to take a running jump off into the air and glide down to where you want to go. The second is a new one for Link as he can now flip his shield onto the ground and surf it down a slope like he’s snow boarding. If that isn’t cool enough, there are mountains you can climb that are capped in snow, so you can literally take Link to blitz up the powder.

Getting around the place is also added to by Link’s ability to ride horses that live in the crumbling land, taking him from field to mountain stream and back again, but the other big advancement in terms of the gameplay is that Link will also be able to fight from the back of the horse, so he won’t need to dismount before taking down a baddie, as you can see in the trailer below. This looks like it will predominantly be with projectile weapons like the bow or the sling shot, but you’ll also be able to leap from your horse to attack the enemy up close. 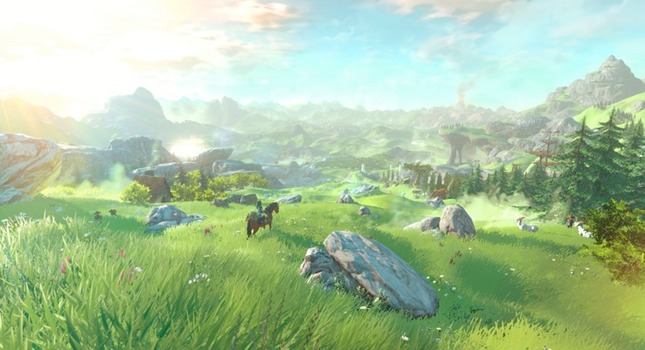 There’s been a significant overhaul to the health system for the game with hunting and gathering food being the main way to stock up on life hearts. This can either be from being left with a roasted meat when you take out baddies or gathering ingredients from the wilderness. The ingredients will also come in handy for elixirs that can help you along the way.

It’s not just food and herbal remedies that you can find on your travels either; you’ll also get to pick up weapons and clothing that you’ll need to advance through the game. With more than 100 Shrines of Trials to find, explore and conquer throughout the land, you’ll need all the assets you can find.

In addition to the standard features, The Legend Of Zelda: Breath Of The Wild will support Amiibo functionality with Wolf Link being ready to go from the release date, which will allow you to call the character in the game to attack nasties or find items for you. There’s a whole series of TLOZ amiibo characters in development, so expect more to be confirmed in the run-up to the launch and beyond.

The graphics on the upcoming game on the Switch and Wii U look amazing, taking the possibilities of cel shading beauty to the next level, and building off the amazing work done on The Legend of Zelda: The Wind Waker HD. It’s got the same cute, cartoon style, but with much more detail built into it, with longer draw distances and a slightly more grown up look and feel, with an immersive world to roam around in.

Link himself is much changed, looking older and heroic than in his previous outing. The graphics on the baddies in the trailer are pretty impressive too and our bet is that these are far from being the big and baddest of the bunch that will feature in the game.

Colour appears to be a big feature, with standout flashes of it piercing the grey stone and sometimes bleak landscape. It appears to only come into the equation where there’s trouble brewing, which will help to build the excitement for the gameplay. It’ll be interesting to see whether or not there’s much difference between the Wii U and Nintendo Switch ports of the title.

Both the Master Trials and The Champions’ Ballad DLC packs have been released as part of the Expansion Pass for BOTW. They’re both incredible extensions to the game with the latter holding the most promise as it delivers up the Master Cycle Zero after an extended series of challenges and Shrines. You can check out our One-Hit Obliterator enemies and Shrines walkthrough to see the opening sections of this.

From what we’ve seen of The Legend Of Zelda: Breath Of The Wild, it’s got a lot built into it to create anticipation in the run up to its release date in early 2017, and we literally can’t wait to see more of it. It’s the game we’re most looking forward to playing and if you’re a Zelda fan, Nintendo Wii U owner, or prospective Switcher you should be salivating at the prospect. It’s looking like the kind of game that could sell a lot of consoles, so the question is how much it can do for the fortunes of either.

You can check out the main trailer for yourself above, along with our how to videos below, but there are a lot more gameplay vids and trailers to watch on the Nintendo YouTube channel. And you can also see Jimmy Fallon demoing the Switch gameplay on the Tonight Show here

Share The Legend Of Zelda: Breath Of The Wild UK release date, trailer and gameplay details