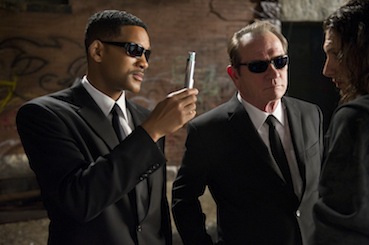 Men In Black 3 bought back agents J (Will Smith) and K (Tommy Lee Jones) to the big screen after ten years of uninterrupted, behind the scenes black ops following the 2002 release of MIB 2. With a DVD release date set for November 2012, the big question is whether or not it’s got the potential longevity to make it through as a returning feature in your DVD collection.

One of the areas that won’t take long to age badly is the special effects, which range from being pretty cool at times to being ropey for the simpler shots of the film. The escape of murderous alien baddy, Boris The Animal, from his prison on the moon is one of the worst SFX moments, looking like it was constructed with ropes, a pulley and a finger hovering between the slow motion and fast forward buttons.

However, the most enduring fact is that the the storyline, cast and script work well creating a film that could easily be watched a good few times down the line. If you judge a movie by its bad-guys alone, you probably won’t go too far wrong, and Jemaine Clement as Boris The Animal is genius, in a vicious Tim Curry sort of way.

While the effects for his missing arm, weird embedded glasses and firing hand darts aren’t particularly impressive, his unstoppable nature is impassive in a mock Anton Chigurh style.

As Boris heads back to 1969, to kill the younger K (Josh Brolin) before he can shoot off his younger self’s arm and stop his plan for world domination, Will is forced to hunt down a time machine and try to save his MIB partner. Brolin does a mean Tommy Lee Jones impression and makes for a great addition to the Men In Black series.

While Will Smith’s jokes are a bit tired at times, he’ll always be the perfect guy for a film like this, plus the addition of Emma Thompson as Agent O caps off a well cast movie (although, her screeching alien inspired speech is frankly disturbing). Her younger self, played by Alice Eve, is pretty fly too.

Special shout outs have got to go to Nicole Scherzinger for being so freaky before getting blasted into space, Bill Hader for a brilliant performance as Andy Warhol, and the wonder that Michael Stuhlbarg brings to the film in the role of Griffin the precognitive alien.

The storyline is the real reason the Men In Black DVD will be watchable for years to come. Going back to a very cool New York of the past was always going to be a brilliant move to reinvent the MIB movies and the addition of a link to J’s childhood, as well as the 1969 moon landing make for superb plot twists.

The Men In Black DVD has a release date of the 5th November 2012.