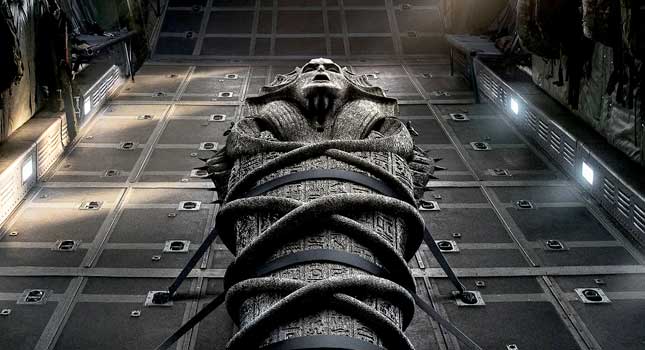 It may not feel like it’s been all that long since the original movies hit the big screen, but it’s actually been seventeen years since the 1999 release of the first film, so maybe it isn’t entirely premature for another roll of the dice in The Mummy (2017). This time around, though, the eponymous mummified remains belong to a princess and when she wakes up, she sets about continuing her plans for world domination once again.

With the arrival of the trailer, we got the first look at Sophia Boutella (Star Trek: Beyond) as The Mummy, and while she may not be terrifying as such, she is pretty impressive in the role. Director Alex Kurtzman intended to deliver a scary monster movie, and there’s an element of that to the film, but the focus is mostly on fantasy and a whole lot of Hollywood action. You can check out the trailer for yourself below, along with the “Inside Look” featurrette, which shows a lot of the filming behind the scenes, including the zero gravity stunts and a little more of Sophia Boutella.

The bandaged bonanza had its release date in the UK on Friday the 9th June 2017, which coincided with its arrival on the big screen in the US. It didn’t have too much big budget competition at the box office with My Cousin Rachel and Berlin Syndrome out on the same weekend in the UK, but with Wonder Woman (2017) out the week before it isn’t the only mainstream flick up for grabs.

The UK DVD release date for The Mummy (2017) has now been confirmed for the 23rd October 2017. It’ll also be out on Blu-ray and digital download, as well as 4K Ultra HD and you can read our full review of the film if you’re weighing up adding it to your DVD collection.

The plot centres on the discovery of a tomb carrying the mummy of a princess who’s life and destiny was cut short before she was embalmed. When the tomb is in transit, she brings about a plague of birds to cut the flight short, crash landing and freeing her from her confines. Having been trapped for millennia she has a whole lot of anger and malevolent bitterness to get off her chest and the world around her, including everyone in it, is going to suffer at her powerful hands.

The Mummy (2017) has been given an age rating of 15 in the UK by the BBFC with “sustained threat, horror, brief strong violence”.

Tom Cruise (Jack Reacher: Never Go Back) leads The Mummy (2017) cast as one of the members of the team transporting the mummy along with Annabelle Wallace (X-Men: First Class), Jake Johnson (Let’s Be Cops) and Courtney B. Vance (Terminator Genisys). Sophia Boutella takes on the power and makeup duties as Princess Ahmamet and the cast is rounded out by Russell Crowe (The Nice Guys), who has a pretty brutal fight scene with Cruise, which you can see in the “Inside Look” featurette above.

The film has been directed by Alex Kurtzman (Star Trek: Into Darkness), who is also one of the producers alongside Chris Morgan and Sean Daniel. Sarah Bradshaw is the executive producer with the monster movie being written by Jon Spaihts (Passengers) and Christopher McQuarrie (Rogue One).

We were kind of sitting on the fence ahead of the release date and we really didn’t have high expectations, which is probably why our review isn’t quite as harsh as other critics. The trailer for The Mummy (2017) didn’t wow us all that much, but the behind the scenes video above showed some of the promise that is locked into the film. You can never write off a film with either Tom Cruise or Russell Crowe, but in the end it’s slightly undone by a little too much fantasy and scatter-gun delivery. We’re big fans of Sophia Boutella’s work in Kingsman: The Secret Service and Star Trek Beyond and she doesn’t disappoint as the undying Princess that is the malevolent force behind the film. Read our full review to find out more.

It’s also starting to look as though it may well go on to be a new series with Universal Pictures ushering in a “new world of gods and monsters” with its Dark Universe. There’s no word of a sequel as of yet, but we might see some character crossover as the shared universe stretches its legs with more films planned in the future.