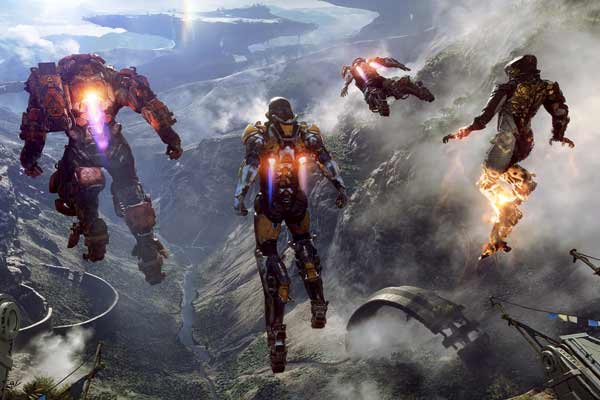 For the past two and half years, Destiny has ruled the online multiplayer RPG world, but now a worthy challenger has finally stepped up. Enter Anthem, EA’s brand new IP developed by Bioware. Revealed at E3 with gameplay on show, Anthem promises to be an exciting online multiplayer action RPG with friends teaming up to explore fascinating environments in one great big world.

This is a game that can be played either solo or with others as you complete missions, collect items and defeat enemies in a battle to protect humanity. As an exosuit-wearing Freelancer, you have a lot of freedom which will undoubtedly cause this game to engulf players’ lives.

There is currently no specific UK release date for Anthem, but EA has confirmed that the game will be coming out in Autumn 2018 for PS4, Xbox One and PC. This long wait may be deflating, but rest assured Bioware is determined to make it worth our while.

After release, the multiplayer IP is scheduled to receive plenty of updates and downloadable content. It’s even been said that Bioware see this game as a ’10 year journey’ for themselves.

Players will control a Freelancer, their own customisable character who is a part of a brave group of people in exosuits. These people belong to a vibrant civilisation, which they often leave to explore beautiful landscapes filled with danger. Their civilisation acts like an in-game hub for the Freelancers, from which they can head out into different environments, a bit like the Farm in Destiny 2.

Besides background information, the exact story of Anthem is unknown as of writing. However, the EA website says that there are ‘forces plotting to conquer humanity’. The story will be one of the big selling points, which is no surprise given Bioware’s reputation with their own previous Mass Effect trilogy storyline.

This is certainly an eighth-generation title which will show off the true power of the PS4 and Xbox One. In the gameplay trailer, the large scale open world features a long draw distance, blinding sun rays and looks full of life. As you venture through, there are many neat details from overgrown nature to wandering wilderness.  It is an immersive, dynamic world free for all players to discover and be awed by.

No matter how you change the appearance of your Freelancer, every character appears very realistic with smooth movements which coincide well with the pace of the gameplay. Your character may be donning armour with pretty colours or armour with a bright electricity element, so there’s a lot of individuality to the way you will play the game.

The main premise of Anthem is to explore diverse landscapes, either as a solo Freelancer or in a group, where players complete missions, collect loot and defeat enemies using their exosuits known as Javelins. Javelins are customisable, so different weapons and superhuman abilities can be equipped. Their most useful component is a jetpack, which helps players to travel through the world at a fast pace while also being able to dive or go underwater.

There are a variety of Javelin classes available to play as, which each one appealing to different playing styles. Three classes were shown off at E3, with two being more focused on. There is the Ranger, an all-round, balanced Javelin, and the Colossus, a larger, heavily armoured Javelin which takes on more of a tanking role. The third class briefly displayed was a levitating Javelin, which just shows the variety that should be expected from these classes.

All gameplay takes place in a ‘shared world’ where solo and team players will be seen doing their own things. It’s expected that most people will choose to be in a team of up to 4 players, but Bioware have said that this world will be single player friendly. Hopefully that means solo gamers won’t have to worry about unwanted interference or being overwhelmed by enemies. One cool feature is that world-altering occurrences can happen at any time, with the one confirmed occurrence being an intimidating ‘Shaper Storm’.

With it being an RPG, Anthem will include a ranking system where players level up their Freelancers, unlocking more customisation options and weapons in the process suitable for their ranking. Collected weapons should cater towards players’ ranking also. For example, in the trailer a level 34 player collected a ‘Legendary’ rifle ranked at level 35. A weapon upgrade system was not shown but it would be a surprise if one wasn’t in the game, given that it is a common feature of the genre.

Throughout the narrative, the player’s character and the world around them will change based on the choices they make whether they’re inspired by revenge, glory etc. This hints at a ‘good vs evil’ style system which was also seen in Mass Effect with its ‘Paragon vs Renegade’ system.

There’s a lot more information still to be revealed for Anthem, specifically a story synopsis, but what we know and have seen already is very promising. The gameplay looks enjoyable with all the potential customisation options being very appealing. Future details on other landscapes scattered in the game world is also an exciting thing to wait for.

EA and Bioware’s new IP is already posing a strong challenge for Destiny 2’s potential online multiplayer RPG crown. Come the release date in Autumn 2018, you and three other friends could be venturing into a massive world with a fun experience waiting to be had. An experience which also threatens to take over your lives. You can see more from Bioware about the Xbox ONE, PS4 and PC release on its Twitter page.