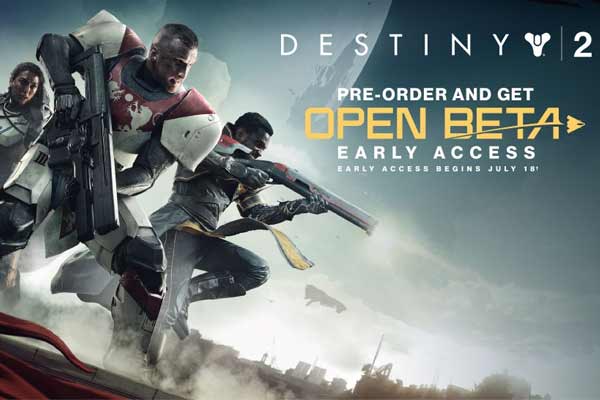 Bungie has just announced the dates and times for the highly anticipated Open Beta for Destiny 2, its huge return to the world of Guardians and the encroaching darkness that they face. It’s all set to kick off on 21 July 2017 with three days of intense fighting across the galaxy, which looks set to tare itself and everybody in it apart.

The Open Beta will close on the 23rd of July 2017 with availabilty for gamers on the PS4 or Xbox One family of consoles. If you are a PC gamer then you’ll have to wait until later in August before getting in on the action yourself. Details for the PC Open Beta will be announced later on down the line, which is a bit of a kick in the guts for mouse blasters out there.

If you’re a Destiny superfan and you want to play the game sooner rather than later, there’s going to be early access to the Open Beta if you pre-order the game. It’ll be available first for PlayStation 4 owners with yearly access for pre-orders starting on the 18th, while the Xbox One early access will be starting a day later on the 19th. It shows that there’s a certain amount of favouritism at the moment between Bungie and Sony.

You obviously won’t have access to the full game during the Open Beta, but there is going to be a lot to try out, including Homecoming, the first mission and cinematic for the main Destiny 2 story campaign, along with new online battle mode, Countdown, which is an adaptation of the classic base attack and decent concept.

You’ll also get to take on the furious intensity of Control, which was one of the main online modes from the original game, as well as The Inverted Spire Strike against the Vex. For the strike, you’ll be able to either bring two friends along for the journey or let matchmaking select a couple of willing recruits to take on the challenge together.

In addition to the gaming modes you can try, the Open Beta will give you a chance to see all of the new sub-classes in the game with Dawnblade Warlock, Arcstrider Hunter, or Sentinel Titan available.

Finally, there will be a fleeting opportunity to try out the new social community area of the game, The Farm. It’s only going to be open for 1-hour on Sunday 23rd – 10am PST, 1pm Eastern Time and 6pm here in the UK – so you won’t have too long to explore it.

With the Citadel out of reach with the invading Cabal, The Farm is where the Guardians regroup To after the invasion and you’ll be able to pick up post, take part in events, get loot from the Kryptarch, get new weapons and Sparrows and everything else you would have done before at the Citadel. Most of the features will be offline, but it will be a good opportunity to get used to the layout of the new home base, plus you can check out the animals roaming around and have a kick around on the football pitch that has randomly been included.

For developers Bungie, it’s obviously an opportunity to stress test their systems and servers, and pick up on any last-minute feedback for the game under duress of high volumes. However, for the rest of us, the Destiny 2 Open Beta is the perfect opportunity to see what the hype is all about, try the game yourself and decide whether or not it’s worth adding to your games collection.