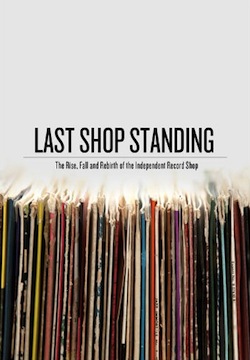 For music fans, independent record stores are little nuggets of gold that have helped great music to inspire generations since the 50s. However, they’ve always had a pretty tough time of it with big chains, bad popular music tastes and the advent of digital music going against them, which is why Last Shop Standing looks so cool.

The trailer looks class and it serves as a brilliant reminder of the charm and style of independent record stores in the UK. The Last Shop Standing DVD is set for release on the 10th September 2012, but it’ll also be screened at cinemas and art venues throughout the UK between September and December 2012.

One of the crazy facts in the trailer is that in the eighties there were a respectable 2200 independent record stores in the UK. The same figures for 2009 saw that they had declined to just 269. If they were an animal, they’d be the white rhino, because they’re about as close to extinction as amazing things get. They clearly need more people love, so whatever you do over the next few weeks, try to watch the DVD and spend a bit more time at your local independent record store.

Just to put it into context, there are over 700 Starbucks stores in the UK, so stop drinking so much coffee and put some decent music into your soul. That’s what we’ll be doing today anyway.

The film includes commentary from lots of well known faces like Johnny Marr, Paul Weller and Norman Cook, but the best bits look like they’re going to come from the interviews with the shop owners themselves, who look and sound like real music legends in their own right.

The Last Shop Standing DVD is available to buy from Amazon.com.