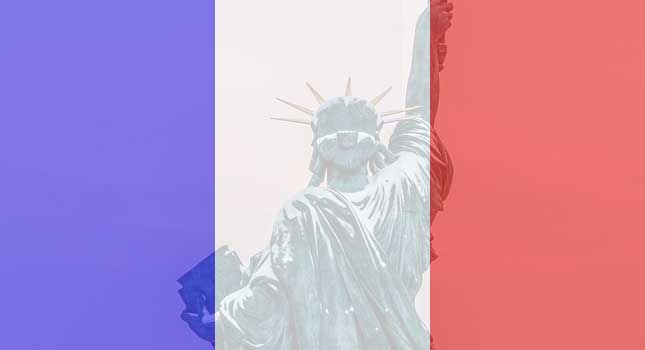 We try to only write about international atrocities where we feel confident that our response offers something that hasn’t already been added, and while we can’t say that’s necessarily the case here, there has been too much negativity being said and done not to respond. Paris is hundreds of miles away across the English Channel and we have little in the way of direct personal ties to the people swept up in the nightmare of the attacks that shocked the city on Friday, but it feels like an attacks on all plural, democratic, free societies and as such an attack against us all.

One of the worst commentators since the atrocities took place is Nial Ferguson, writing for The Sunday Times, in which he described the attacks in comparison to the fall of Rome, completely missing the more recent, relevant history of the First and Second World Wars. Far from being an indication that Europe could be on the brink of falling, it is instead a horrific prompt for international solidarity that will galvanise yet more initiatives to tackle the issues at their source.

However, seeing as clumsy (and, we’re sure, well meaning) comparisons appear to be the order of the day for the Harvard professor’s cudgel-like grey matter we’re going to add our own and hope it isn’t anywhere near as offensive as Nial’s bumbling. Poachers have been attacking game parks for years, and it’s definitely a battle that continues on today, but with each new attack and each new statistic on the number of dead, the rangers, authorities and people that care step up their campaign to stop them and cut them off at their source.

There have undoubtedly been casualties over the years and there will be more, which is a truly sad situation, but the fight to halt their destructive influences will never abate. Border control becomes smarter, resources and consideration gets applied and hearts grow stronger in resolve to bring an end to the losses. It’s a situation that undoubtedly needs more in the way of effort, but it’s not necessarily a sign that the parks are doomed to eventual failure at the hands of men that worship the pound to the detriment of all others.

Returning to Ferguson’s preposterous fall of Rome references and stepping over the dirty protest of his dangerous comments about theology, there are a number of Latin phrases that are more relevant to the situation than a look back at the demise of the Roman Empire. Auribus teneo lupum tells us that there will be risks in both action and inaction; Brutum fulmen would force us to question the true nature of the threat – not to underestimate it, but to accurately gauge its strengths and weaknesses; Carpe diem and carpe noctum will remind us to live for the moment, to work hard and not forget the fun in life, no matter what; Carthago delenda est sums up the extend to which actions can escalate with tough decisions to be made; and castigat ridendo mores points out the need for the kind of satirical scrutiny that no idea, political opinion or theological belief should be above.

You might also be inclined to add cui bono? and Hanniabl ad portas to the list to apportion scrutiny to wider socio-political implications, but in this situation it’s less relevant. What Nial Ferguson was striving towards, albeit somewhat tactlessly, was highlighting the danger of utter and myopic belief in another great Latin phrase, hic manebimus optime! – “here we will stay most excellently” – indicating that nations, empires and gods can rise and, more importantly, fall if you do not expect the worst.

While there’s a modicum of truth in that, it’s a rather blunt instrument, as well as being catastrophically ill put, timed and weighted. It’s definitely true that nations that do not find a way to adapt are at most risk of falling, but it is unfair to castigate France and Europe as a whole for attempting to have a measured response to the threat to its borders.

Paris wasn’t undone by complacency, it was instead a victim of its own admirable principles, which we love it for. France is a nation that values freedom and equality, having fought so hard throughout history to secure them. Abuse of these values shouldn’t be used as a rationale to reduce them, but it should be used as a reason to come up with new ways of ensuring society is both free and safe to be a part of.

To sum it all up, Europe and the rest of the international community will need to come together as diverse kin as we all mourn the losses that have been suffered, and then return with renewed resolution to halt, prevent and resolve right the way into the heartland of the origins of the atrocities. Europe is not a decadent victim ripe for the taking, as Ferguson would have you believe, and there is no multi-fronted sack, attack and pillage process undoing it, as was the case with Rome. It is instead a large, many-nations community with strong ties to other international powers and it is trying to manage a very difficult situation without giving up the fight to retain civil liberties. The most recent attacks will force a response, but it’s going to need to be a tightly controlled one if its going to keep the wolf from biting its hand without slaying it pitilessly.

Share our analysis of Nial Ferguson writing on the Paris attacks and their parallels to the fall of Rome with: