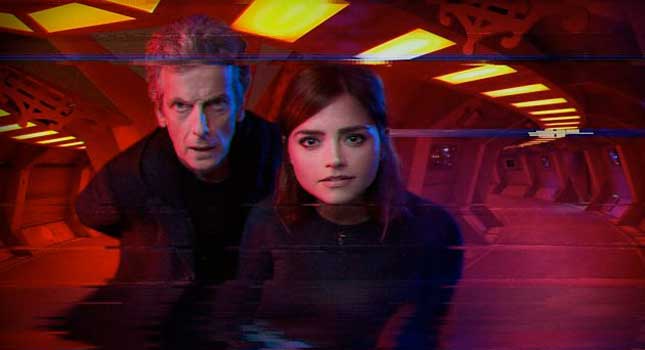 Mark Gatiss got Doctor Who Series 9 back to a flyer in Episode 9: Sleep No More with a little help from his old League Of Gentlemen buddy, Reese Shearsmith, as the Doctor tackled a brand new beast that could turn out to be a long serving villainous entity. Putting the less entertaining elements of the Zygons behind us, with two episodes that didn’t live to our expectations for the series, it was time to get back to what Doctor Who does best, mystery, suspense, thrills and mild terror.

It’s got shades of survival horror classics like Ridley Scott’s Alien, but without the high gloss finish, entirely serious intent or bloody brutality. There’s also a little head nod in the direction of computer games like Resident Evil, Alien: Isolation and Zombi U with the torch-lit viewpoint that’s used throughout the episode, and it all makes for a very atmospheric experience as a result. The monsters may not be anywhere near as terrifying as any of the gruesome shambling slashers above, but it’s still a lot of fun to see it all unfold on the Beeb.

There’s also a big futuristic nostalgia trip in the adverts for the Morpheus machines and the Mr Sandman music it features, which is reminiscent of Fallout 4, making us jump to the conclusion that Mark Gatiss may well be as much of a computer games freak as we are. Wherever the inspiration for Sleep No More comes from, it works well, keeping you on the edge of your sleep and wracking your brain in an attempt to work out what the Doctor means when he says, “nothing makes sense here”.

The story takes place on an abandoned space station in orbit around Neptune called Le Verrier (named after French mathematician Urbain Le Verrier, who pioneered celestial mechanics and predicted the existence of Neptune using maths alone). It starts out with a rescue crew who begin to explore the darkened base with supercharged guns with a torch attachment to light the way in nerve jangling shadow fall off. However, it doesn’t take them too long to stumble up the Doctor and Clara, who are investigating the station too, but the situation becomes nightmarish when they’re attacked by killer monsters in the dark.

The mystery element of the episode kicks up a notch when they stumble on the sleep condensing Morpheus machines and it all gets even more complex when they finally stumble upon Gagan Rasmussen, the inventor of the device, who’s been narrating the mayhem retrospectively in found-footage up until this point. Played by Shearsmith he make for an interesting character for the Doctor, Clara and the nervy rescue crew to get to grips with, especially when things start to go downhill for them all.

The genius of the episode is made all the more clever when you realise that it’s also a bizarre pseudo number 9 story in advance of Inside No. 9 Series 3, which Shearsmith and fellow League Of Gentlemen alumni, Simon Pemberton, will be creating to air in 2016. If that isn’t enough mental arithmetic, the fact that the episode finish without resolution leaves us with a lot to ponder for the future of the Time Lord and we’ll be very surprised if we don’t see more of Rasmussen and his Sand Men before too long.

There’s also some pretty cool special effects to look out for in Episode 9, in and among the more ramshackle styling if the monsters of Le Verrier. The set is very cool, looking every bit the futuristic space base it’s meant to be, especially with the camera pan through the windows to the planets it orbits. There’s even a little CGI mastery in the mix, which looks decent enough when clone crew member 474 crushes a Sand Man’s arm in a door, but looks even more impressive for the face scene at the end of the episode.

Sleep No More may well have some similarities in nature to earlier episode, Under The Lake, but it’s got it’s own visual style and space monster ethos that differentiates it from the earlier ghost story. It’s definitely one of the better episodes in Series 9 and we’re even starting to get used to the sonic sunglasses not that they’ve had a little action. The series also continues to play with the notion of of Jenna Coleman’s departure, which we’re really starting to enjoy, and while it’s not the out and out misdirection of The Zygon Invasion it does leave you wondering whether or not the Doctor can cure her from the influence of the Morpheus machine, because he didn’t seem too sure.

Share our review of Doctor Who Series 9, Episode 9: Sleep No More with: