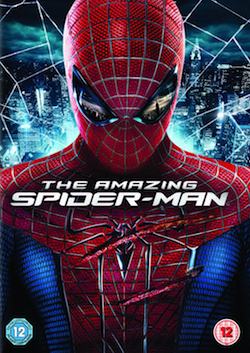 The Amazing Spider-Man had its UK release on DVD in November 2012 bringing the second significant big screen incarnation of the “Webbed Slinger” to home entertainment. It had a lot to do at the cinema with the last series being so fresh in everyone’s memory, but it managed to bring a different take on the old Stan Lee and Steven Ditko inspired story, reinventing the potential of the films.

More serious, and lacking in the tongue in cheek approach of the Sam Raimi directed films, The Amazing Spider-Man reboot gave Marvel a solid platform to build on the Peter Parker story that first appeared in their comics back in 1962. It’s got a lot more edge to it thanks to Andrew Garfield, who might have seemed an odd choice for Spidey when it was first announced, but he’s delivered the teenage Parker that made the original comic book stories so ground breaking at the time.

Sadly, the sequel didn’t work out so well, which left the Marc Webb films at just two, and went on to inspire second reboot in Spider-Man: Homecoming, but that takes little away from the quality of the 2012 superhero film.

The UK release date for The Amazing Spider-Man DVD was the 26th November 2012 and based on the cinema viewing it’s definitely a film that could be watched a good few times. The portrayal of Peter’s troubled childhood and the impact of the uncle Ben (played by Martin Sheen) story-line on him is pretty emotional, giving the film good weighting. Added to that is the fact that Aunt May is played by Oscar-winner Sally Field (yeah we love you!) and as a result you’ve got a Spider-Man film that’s had a lot of acting skills.

The addition of Rhys Ifans (Greenberg) as Spider-Man’s web throwing target practice, Dr. Curt Connors (AKA the Lizard), works well with his uncanny ability to make the simplest of scenes feel uncomfortable, and Irfan Khan is a bit of a sh*t as Dr. Rajit Ratha, an Oscorp executive and Conners’ boss. Emma Stone (The Croods) also does a great job in the cast as Peter’s first main squeeze, Gwen Stacy, giving a lot of balance to the film.

The Amazing Spider-Man DVD comes with an Ultra Violet copy, so you can download it or stream it to multiple devices. There’s also deleted scenes, audio commentary, Oscorp production art gallery and stunt rehearsal special features to watch too. It’s available from all good home entertainment retailers.

Share the UK release details for The Amazing Spider-Man DVD