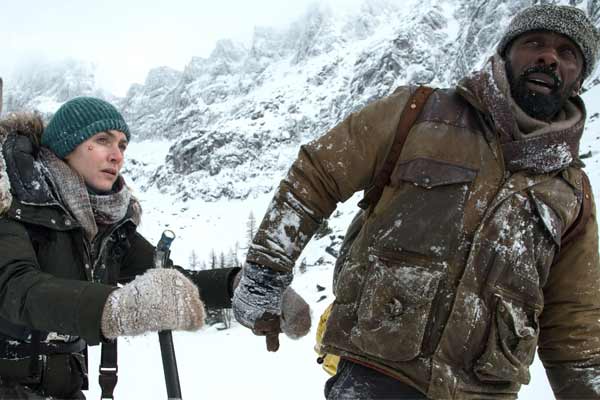 With the excitement of the cinematic adaptation of Stephen King’s The Dark Tower along with his part in Thor: Ragnarok, Idris Elba has had a pretty big year, but he also managed to team up with Kate Winslet (Wonder Wheel) in the snow-locked peril of The Mountain Between Us. The disaster movie sees the two stranded in the frozen mountain wilderness with no one but each other for help.

Directed by Academy award nominee Hany Abu-Assad, it’s this years only real winter scene movie, but with the likes of Everest and Alive before it, things didn’t bode well for the two would-be survivors. The trailer below paints an equally grim picture for them with Kate’s character injured badly from the plane crash and the ice cracking in the closing scene, which features a terrifying plunge into icy water. You can check out our review summary and video below to find out how it all came together.

The Mountain Between Us had a UK release date on Friday the 6th of October 2017, which is the same as its arrival in the US. It came out in cinemas in the UK on the same weekend as Blade Runner 2049, so it had some significant competition at the box office, which isn’t easy for a small film like this to go up against.

It won’t be out on DVD and Blu-ray until 2018, so you should probably expect it around February.

The plot follows surgeon Ben and photojournalist Alex as they charter a plane over the winters wilds of America when they’re regular flight gets cancelled. Alex is trying to get to her fiancé to get married the next day, and Ben is trying to an urgent surgery he’s meant to be performing. Their plans get sideswiped when their small chartered plane goes down on a vast mountain range, killing the pilot and leaving them stranded.

Alex hurts her leg badly in the crash, their only means of communication aren’t working and no one knows where they are, so there is little prospect of a rescue party coming to save them. Eventually they decide to take matters into their own hands and head out into the wilderness in a bid to get back to civilisation, but there’s a lot of danger for them to get through along the way.

With such a tight, two-person focus, Kate Winslet and Idris Elba are pretty much the entire cast list for The Mountain Between Us, apart from a few minor exceptions. Dermot Mulroney plays Alex’s fiancé and Beau Bridges stars as the pilot that they hire to make the treacherous flight. You can see more from the cast on the official Facebook page or Twitter page, including interviews, behind the scenes images and shots from the premiere.

Hany Abu-Assad has directed the film from a screenplay by Chris Weitz and J. Mills Goodloe, which is based on the Charles Martin novel of the same name. It has been produced by Peter Chernin and Jenno Topping with 20th Century Fox releasing the film.

We’re suckers for snow scenes, and the trailer for The Mountain Between Us sets things up pretty well for an intense and dramatic survival ride. You can see from the scenes featuring the crash at the beginning of the trailer that the budget wasn’t huge for the production, so this sort of compromises the setup of the story a little.

The cast work well enough together, but this is as much a will-they-won’t-they romance as it is a survival flick, which changes the dynamic from what you see in the trailer. Overall, it’s a middle-of-the-road film with a few good moments of tension, but it drags a little and loses its way with the romance side of the story.

Having a release date in the UK that coincides with Blade Runner 2049 made it difficult to get much in the way of cut through. However, for anyone that prefers snows scenes, outdoor danger and a little romance to sci-fi spectacles then this is the film of choice.

The Mountain Between Us trailer:

Share the The Mountain Between Us UK DVD release date, cast and film details