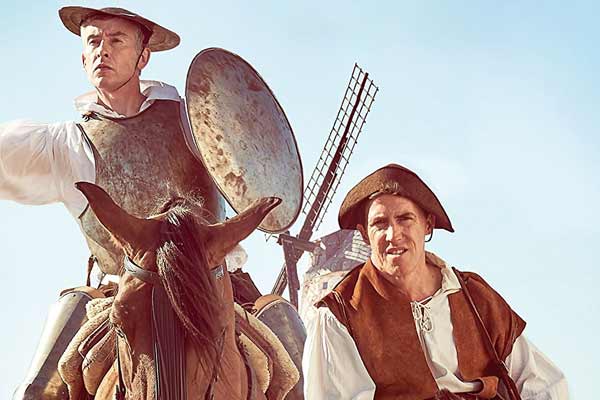 Steve Coogan and Rob Brydon’s big return together in The Trip To Spain will be getting a DVD release on the 31st July 2017 in the UK, so here are all of the trailers and clips from the new series as a preview for anyone that missed it. While there’s only around four minutes of video, it does feature everything from exceptional Mick Jagger impressions, a section on the hilarious front cover for the DVD (pictured above) and more great dialogue between the two comedy heavyweights.

Having aired on sky digital back in April, following its move from BBC2 for the third series, there are bound to be a fair few fans of the show that didn’t get to see it when it was on. It makes the DVD of the six episode odyssey more significant than the previous two series, so we’re expecting it to be one of the big home entertainment releases for the month.

The Trip To Spain Official trailer

The first video for The Trip To Spain is the official trailer, clocking in at two and a half minutes, and it acts as a great setup for the series, as Steve Coogan calls showbiz pal Rob Brydon to invite him on another foodie adventure. With a screaming baby boy in the room with him he’s quick to say yes and so the Spanish quest begins with the duo getting an early night, for they were to rise at 7:30-ish the next day.

Impersonations include Roger Moore, Al Pacino, Mick Jagger and Scaramanga, and you’re on your own deciding who does which better than t’other. You only see it for a second at most, but we’re pretty sure that there’s at least one Alan Partridge “ahaaa” moment from Coogan, so most bases have been covered, including the gourmet chorizo.

The mini-performance of Hamlet looks like it’s going to be hilarious, and Coogan doing star jumps on a mini trampoline is surely worth getting the DVD for all by itself. There are plenty of friendly rival digs to look forward to, including a discussion about who is the better actor between Laurence Olivier and Steve Coogan.

There are only forty seconds here, but the addition of Steve and Rob singing is worth the micro-effort of it. There’s also an awkward Nazi moment that’s reminiscent of David Bowie’s was it/wasn’t it salute, and some overly warm outro tones from the Sky Atlantic lady doing the voice-over. In fact, you’re better off stopping the video at 33-seconds to avoid a confused mismatch of emotions that leap between pent-up rage and unrepentant ardor.

This is pretty much the entire Mick Jagger scene from episode one of The Trip To Spain. From a simple Rob Brydon anecdote about the Rolling Stones front-man it descends into a battle of oneupmanship between the two. The hand clap and peacock feather ruffle is funny, but if anything it just gives a little taste of the genius of the series, which is almost three hours of viewing on the DVD.

Visit our DVD release dates page for more great TV and films coming to DVD & Blu-ray in the coming months.