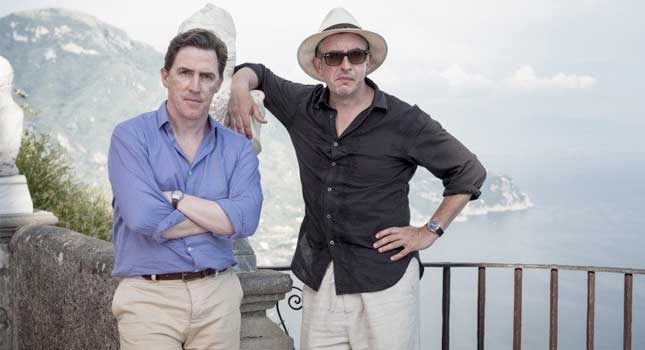 If the Northern dining Odyssey of the opening series, and the 2014 jaunt to Italy wasn’t enough ultra Rob Brydon and Steve Coogan jocularity for you, the comedy duo have teamed up once again for a third time in The Trip To Spain on Sky Atlantic. With Michael Winterbottom – the creator and director of the show – as their referee, there should be a whole lot more comic comradery, aging angst, posh nosh and friendly competition to make the new series another hit. Check out the first look clip below to get a little taster, along with some great Mick Jagger impressions. If you missed it on Sky Atlantic, it’s recently been confirmed for DVD release (details below), so you’ll be able to catch up with them en España too.

The air date has recently been confirmed by Robert, again via the medium of birdsong, and The Trip To Spain will be making its debut on Sky Atlantic on the 6th April 2017. Sadly, that means that it won’t be coming to BBC, where the first two series had their release. Filming wrapped earlier in 2016, just in time to get the new show ready to go out just ahead of the Easter Hols and as you can see from Rob’s cool cucumber sunglasses pose below, it’s set to be a scorcher.

The first two series went on to be released on home entertainment, and now the 3rd trip has been confirmed for a DVD release date of the 31st July 2017 in the UK. As expected, we had to wait a little longer for the release date to come around for anyone that doesn’t Sky. While The Trip arrived on DVD just a month after the series air date, and it was a similar story with The Trip To Italy, the timescale for The Trip To Spain DVD were a little later due to the programme’s move over to Sky Atlantic, which will have wanted to make the most of the slot when it aired back in April. 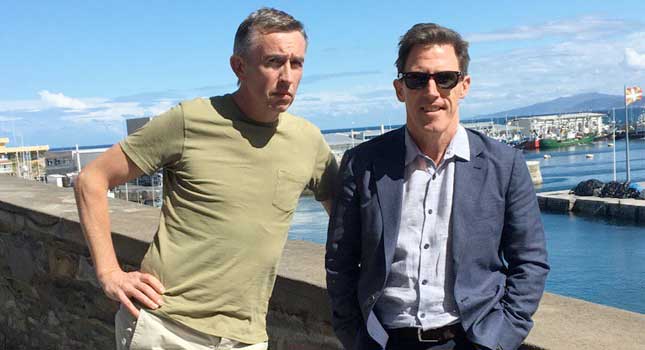 About The Trip To Spain

You can see from the DVD front cover below that there’s a certain connection between the show and the odyssey of Don Quixote’s three journeys. Inspired by the literary character, Rob Brydon and Steve Coogan are off on another adventure taking them all across Spain, sampling local cuisine along the way.

This time, they’ll be driving the same route as poet and writer Laurie Lee down the length of the country, getting their fill of culture, history and tapas as they go. Travelling more than a thousand miles in the process, it’s the kind of journey you’d want to make with a loved one. Luckily for Steve and Rob, they’ve got each other.

The show started filming on the 14th September 2016 on location in Spain with Rob Brydon Tweeting the simple, but poetic message, “Here we go again… #thetriptospain”, along with the picture below of him with Steve Coogan on his Twitter profile. It looks like sun, sea and T-Rex will be on for the comedy odd couple, combined with a raft of random conversations, too many impersonations and a Tapas-style array of improvisation.

Both Steve Coogan and Rob Brydon have been pretty busy recently, so if anything it’s impressive that they managed to find time for the new show, but with chunky cheques from Sky, a free hol to Spain and the prospect of working with each other again it was probably worth the effort – especially when you throw Michael Winterbottom into the mix.

Coogan also had the release of his second Alan Partridge biography, Nomad, to add to his literary output following I, Partridge, while Mid Morning Matters Series 2 aired on Sky Atlantic earlier in 2016. On the other side of the comic coin, Rob has had dwarfing duties to take care of in The Huntsman: Winter’s War, which is hilarious, as well as a new series of Would I Lie To You to put together, so it’s not like he’s been sitting on his couch in South Wales waiting for a call.

The Trip To Spain should be another brilliant comedy from the two behemoth kings of British humour. They’ve both been around long enough to craft a complex approach to making people laugh and their full might is usually combined in their jaunts together. There’s a clever direction to the show and it was good to see it back on the TV again. The transmission on Sky Atlantic in the UK earlier in the year did reduce its reach a little from its previous home on BBC, but the upcoming DVD release should come as good news for fans of the show. 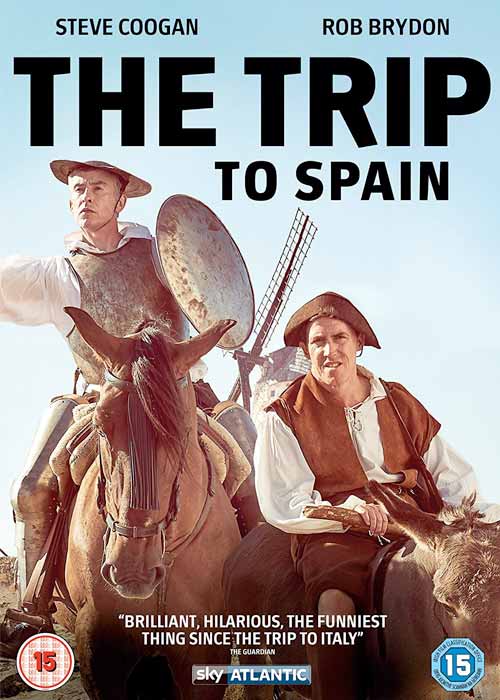