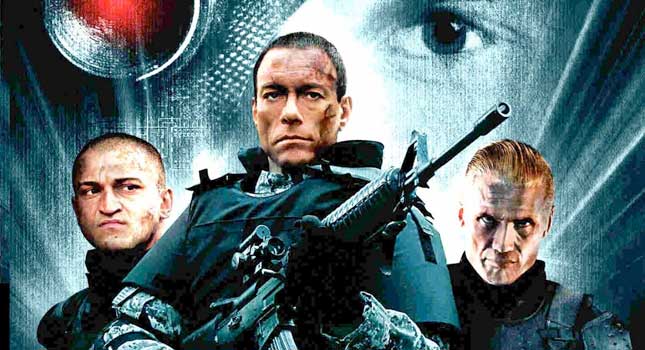 Yes, you read right. The mandroids are back, admittedly slightly less shiny skinned, but possibly as badazz as they ever were. With many working titles originally bandied around, ranging from Universal Soldier 3 to UN: A New Beginning, Universal Soldier: Regeneration had two possible outcomes; either it would go on to be an amazing revamp of a 90s classic with slight self deprecating undercurrents, or it’ll be a disappointing rehash of a once great film that tries too hard on a ropey budget. Our heart and the trailer (below) make us dream of the former, but our head told us not to get me hopes up.

Possibly the most telling piece of information, however, is that the humanoid epic went straight to DVD (and Kinky Winston apparently – Blu-ray for any philistines out there) on the 2nd Feb 2010 for some reason. Bad or good, it’ll still be class. However, I’d love to see it at the cinema, so if anyone knows of anywhere planning to show it, get in touch. Alternatively, contact us if you want to join our petition to bring Universal Soldier Regeneration to the big screen. If I get more than 22 brave signatures I reckon I can get them to hook it up at the Stepney Green Genesis.

So anyway, the plot goes that they have to reanimate JCVD to tackle a band of “rogue militia” that have unleashed another Universal Soldier (“The Pitbull”) on Chernobyl – not sure why really. However, the plot twist comes when the baddies turn to the frozen He-Man, Ivan Drago legend that is Dolph Lundgren to sway the fight in their favour. You can probably guess the rest, but essentially they all go at it hammer and tongs in a bid to tare the ever loving circuitry out of eachother.

However, none of that matters too much, as it missed its chance at the big screen already with the straight to DVD and Blu-ray release. We’re still hoping that the Stepney Green Genesis eventually come on board on this one and give Universal Soldier Regeneration a proper showing, and then we’ll be the happiest muscle this side of Brussels.

Hopefully our call to arms starts a revival of all their old characters – Ivan Drago’s boxing come back against Nikolai Valuev at the Sheffield meat market, Kurt Sloan returns to Thailand only to find that Tong Po has killed Zion in the intervening years as well as acquiring new Jedi mind powers that Kurt must overcome, and Lyon (A.W.O.L. Lionheart) Gaultier accidentally bumps into Attilla at a jumble sale in Shoreditch and his long standing animosity towards Lyon erupts into a fight down Brick Lane’s back alleys culminating in an even more emphatic flying elbow uppercut finishing move from the Foreign Legion paratrooper through the window of the Duke of Yorks theatre.

The film was directed by John Hyams, who also went on to direct the follow-up straight to home entertainment movie, Universal Soldier: Day of Reckoning. It was written by Victor Ostrovsky, and produced by Craig Baumgarten,Mark Damon and Moshe Diamant.

Share the details for the Universal Soldier Regeneration DVD and Blu-ray release with: