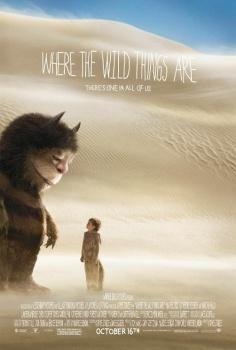 Directed by Spike Jonze (of Being John Malkovich fame) and produced by Gary Goetzman (The Pacific), the story follows Max, a lonely 9 year old boy, on his post tantrum adventure in a boat across the ocean in a cool wolf costume to an island where six wild things live. With the possibility of being eaten, kingship over the wild things, island fort battles and dysfunctional relationships, Max has a lot to deal with on his great adventure.

James Gandolfini (Tony Soprano from The Sopranos), Forest Whitaker (The Last King of Scotland) and Catherine O’Hara (kevin’s mum in Home Alone) all play wild things, so if you haven’t seen yet either expect some larger than life voices.

The film has been a long time in the making, with an initial trailer on Universal’s 2000 adaptation of How the Grinch stole Christmas, but disagreement between Sendak and Universal led to the project moving over to Warner Bros. Now ten years later we finally get to see Where the wild things are on DVD and Blu-ray with all the animated flair of the London based visual effects company, Framestore.