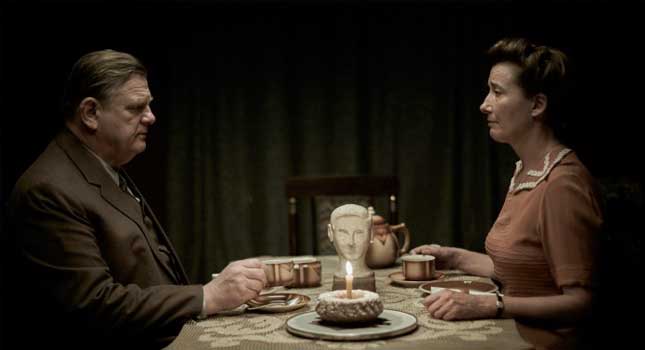 Hans Fallada’s brilliant novel, Alone In Berlin, made its big screen debut in 2017 with a new movie adaptation that features Emma Thomson, Brendan Gleeson and Daniel Brühl in the cast. It’s a tense wartime drama thriller, telling the story of a quiet couple’s resistance efforts in Berlin at the height of Nazi power in the German capital during World War II. Check out the trailer below to get a glimpse of the tense situation they faced.

It’s an incredible story of bravery, based on the real life actions of Otto and Elise Hempel, who took it upon themselves to stand up against the might of the state by leaving protest postcards around Berlin. After the end of WWII, Hans Fallada was inspired by the details of the case and wrote his novel, Jeder stirbt für sich allein, which translates as Every Man Dies Alone in British, but it was renamed Alone In Berlin for its release in the UK and America in 2009.

The film had initially been slated for a UK release date of the 29th September 2016, following on from its premier at Berlinale Film Festival on the 15th February 2016, but it went on to be put back for limited release on the 10th March 2017. A general release followed on the 30th June 2017. It initially arrived on the same weekend as Kong: Skull Island in March, but its main competition for its full June UK release was Baby Driver. Smaller community cinemas had Alone In Berlin to open in early July, making it one of the more convoluted cinema releases of the year.

The film has been confirmed for a UK DVD release date of the 23rd October 2017 and it will be available on Blu-ray on the same date. You’ll be able to own it first on digital with an expected release earlier in October, before the rental on the 23rd.

The plot is a pretty close recreation of the real life story that inspired it, focusing on the subversive notes of protest left throughout 1940 Berlin by working-class couple, Otto and Anna Quangel. When their son dies, they decide to turn their frustration with Adolph Hitler and his Nazi regime into their own form of protest. They begin to leave postcards condemning the political situation their lives have been trapped within, and calling to anyone that reads them to stand up against it.

However, their efforts don’t go unnoticed and it isn’t long before the Gestapo pick up on the notes and begin to investigate the case with increasing intensity. Inspector Escherich leads the investigation, under a lot of pressure himself to find the culprits as fast as possible, and the net begins to tighten on the couple.

Alone In Berlin has been given an age rating of 12A in the UK by the BBFC.

The novel and the real life story that inspired it are truly remarkable, so there’s a strong concept behind the movie adaptation of Alone In Berlin and it’s been given a good cast to make it accessible to an international audience. Reviews have been mixed since its premier at the 2016 Berlinale back in February, but the trailer below definitely captures the tense nature of the situation. It’ll be worth a watch, but maybe keep your expectation in check.

Read our review of Hans Fallada’s Alone In Berlin book if you want to read the story before watching it on the big screen. You can also visit hansfallada.com for more information on the author.