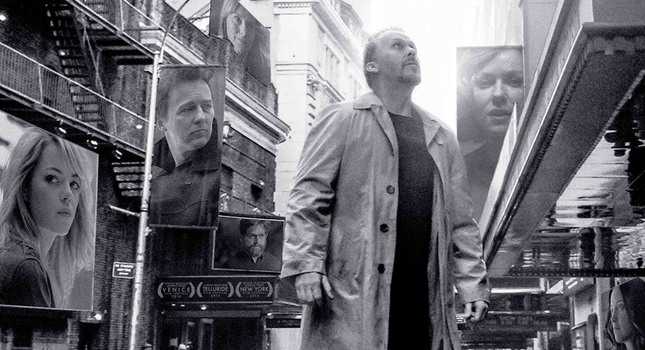 Sometimes actors become legend because of the roles they’ve played in the past and with Michael Keaton that happened when he donned the Batman outfit in 1989, reinventing our concept of a big screen superhero and paving the way for the raft of modern day comic book movies. With the release of Birdman he got back to his superhero roots once again, but it’s a concept that’s a long way away from the caped crusader of old as he battles with his own ego, family trouble and the call of the Broadway stage.

It’s been a while since a film starring Keaton put him in the kind of iconic role that he delivered in Batman, with his most recent outing as the main baddie in RoboCop (2014), OmniCorp CEO Raymond Sellars, not quite having the menace needed to impress. While he surprised as the Ken doll in Toy Story 3, Birdman turned out to be the kind of movie that put him back on the map.

The movie has already been released in the US, having hit the cinemas on the 17th of October 2014 following on from its premier as the opening flick at the 71st Venice International Film Festival on the 27th August 2014. However, the Birdman UK release date was a little behind the US box office as it didn’t make its way to the big screen here until the 2nd of January 2014, making it a good option for first film of the year, as it turned out to be for us and the 2015 Academy Awards.

It has also been confirmed for release on DVD, Blu-ray and digital download on the 4th May 2015.

The plot for the film, also known as or The Unexpected Virtue Of Ignorance, centres around Riggan Thomson (Keaton), an ageing actor who was famous for playing a well known superhero called Birdman – so far, so close to home. In an attempt to inject a little more life back into his career he sets out to fund a Broadway play, which he also directs and stars in, alongside his girlfriend Laura and a bisexual actress called Lesley.

However, he’s got a pretty big ego and psychological issues to battle with along the way as he keeps hearing the voice of his masked alter ego, who mocks him that the new enterprise is doomed to failure. If that isn’t enough to contend with, his daughter Sam, a recovering drug addict, who’s also helping out on the production, becomes the target for the famous method actor Mike, who is conscripted onto the play’s cast at late notice.

The film has been directed by Alejandro González Iñárritu, who’s previous work includes the impressive 21 Grams and Amores Perros. Iñárritu also co-wrote the movie with Nicolás Giacobone, Alexander Dinelaris, Jr. and Armando Bo. Filming took place in New York City, the backlot to Riggan’s dysfunctional story, giving the movie a lot of scope to play around with the cinematic heritage of movies set in the Big Apple.

With rave reviews following it’s premier at the Venice International Film Festival, the closing night of the New York Film Festival and its general release in the US, Birdman is widely considered to be a great return to excellent form for Michael Keaton and another impressive movie from Alejandro González Iñárritu. It’s also good to see Zach Galifianakis taking on more of a serious film like this, as it blurs his fantastical, comic side with more substance, giving him a chance to make up for all of the the like of Hangover 2.

It’s already picking up  on award nominations and while it proved to be a bit of a slow burn at the cinema, it’s looking likely that it’ll go on to be considered a cult classic, especially following its belated release in the UK. Read our full Birdman review for more details on our take on the darkly comic movie. For anyone that missed it on the big screen, it’s definitely worth watching on DVD, Blu-ray or digital download, and with the Best Picture, Director, Cinematography and Best Original Screenplay Academy Awards it’s got even more validation for anyone still a little skeptical about the film.