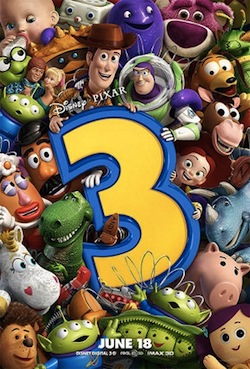 By far the best digitally animated film I’ve seen since Toy Story 2, Toy Story 3 is as close to perfect as you can get, but similarities in the storyline to the second film leaves you with the feeling that the writers haven’t moved the overarching plot along by much.

Visually stunning and moving at a perfect pace, the film is loveable, cute and witty. The script is funny, touching and clever, while the characterisation is in a different class to many other digital animation films.

The story picks up years after the second film as Andy is about to move away to college and the toys face attic storage, the rubbish bin or being donated to the local day care centre. However, just as in Toy Story 2, along the way they come up against a toy that has become disillusioned by rejection and turned into a bit of a wrong-un. It’s here that the film feels a little too familiar.

Despite the vague similarities, Toy Story 3 is a classic that won’t be beaten this year for animated class. However, if or when a 4th film surfaces, hopefully the writers will give us something a bit more creative than another rejected toy bad guy to face. If I was writing the 4th film, there would be a sinister disturbance in the toy world in which all of the baddies in toy history club together and move for world domination, one bedroom at a time. It would also be interesting to see a darker story hit Woody, Buzz and Rex, like Tim Burton’s animated shadow 9 (2009).