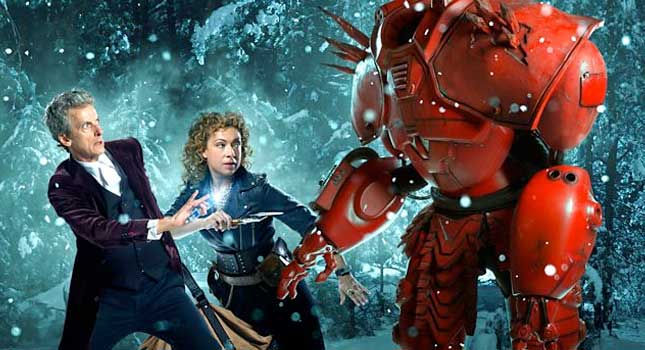 Steven Moffatt has a tendency to veer in the direction of the less conventional, which is one of the reasons Doctor Who has delivered so many surprises over the years. However, this can sometimes steer things a little awry on occasion and while this isn’t entirely the case with The Husbands Of River Song, there is an element of it in the ending to the 2015 Christmas special.

Intended as the lighthearted comedown to the drama of Series 9, it’s got a light heart for the most part with silly comedy from both Greg Davies (Cuckoo) as the bombastic cranial portion of King Hydroflax and Matt Lucas as River’s daft and simpering flunky, Nardole. It’s an episode that seems to have been designed from the floor of the TARDIS up to make you smile and it delivers on this with ease from beneath a thick blanket of Christmassy visuals that works the good cheer angle.

Alex Kingston has some great lines throughout the episode including the genius of “cheer up, get a saw” when the doctor questions her murderous intentions, and it’s nice to see her back in the role of River Song. She’s on good form as the much-loved wife of the Doctor and her initial reveal from behind a very festive hooded cloak starts things out with classic Who mystery that slowly unfolds as the story progresses.

It starts out with the Doctor hiding away from the wintry festivities in a far flung colony way in the future, complete with a sign to ward off carol singers with critical appraisal post-warble. However, when he’s summoned as a surgeon by Nardole and is taken to save River’s new husband, King Hydroflax, it all goes a bit wrong, sending him off on a new adventure with River in a bid to get away from the unrelenting robotic body of the decapitated intergalactic monarch.

It slowly begins to revolve around the complex relationship between River and the Doctor, as Moffatt has been fairly open about trying to make sure that she gets at least one more episode in under his watch. Things get a bit emotional in the end though, which kind of steels some of the fun-filled approach to the episode, so it ends up feeling a bit at odds with itself in the end.

In general, The Husbands Of River Song starts out as a throwaway bit of fun in the grander scheme of Doctor Who‘s ongoing history, but it attempts to get more serious out of nowhere in the final few moments. When we start to criticise it too much, our arguments start to break down under the weight of references to gallows humour from the Doctor and the difficulties he’s always had in expressing or understanding emotion. However, it still doesn’t quite live up to the expectations of Christmas Specials past, present and future.

Read our full review of Doctor Who Series 9 for more details on the rest of the 2015 episodes.

Doctor Who The Husbands Of River Song review: 3.7/5

Share our review of Doctor Who The Husbands Of River Song with: