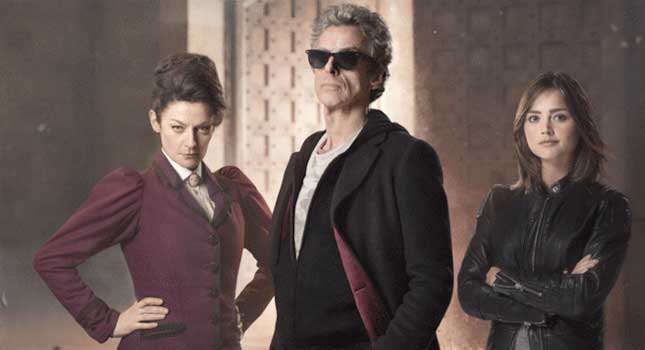 It was obviously too early to tell for sure how good Doctor Who Series 9 was going to be having only watched the first episode back on Saturday the 19th September 2015, but we certainly had our reservations about the 12th Doctor’s second major season outing. It had started out steeped in the history of the longest ever running sci-fi TV show, with Davros, the Daleks, Skaro and The Master in Missy form all in the mix, but somehow it struggled to grab us with the same level of excitement as the opening entry to Series 8.

That said, we were still quite hopeful for the rest of Series 9, especially if the trailer, impressive guest cast members and impending return of River Song were anything to go by. There were still a lot of unanswered questions from the few teasers that had found their way into the pre-season TV spots – not least of all, who the flying sonic screwdriver Maisie Williams was going to play – so there was more than enough anticipation left in the bread basket despite a troubled first episode. Luckily, what followed the two-part opener was mostly brilliant, and you can read our blow-by-blow account of it all in our full review of Doctor Who Series 9 below, along with our take on each of the episodes.

If you haven’t seen episode 1, you should probably head of and watch it before reading on as there will be the occasional spoiler here and there. You should also watch the prologue, which is also available on BBC iPlayer under its standard 30 day rule, and while it doesn’t give up too much information, it’s just enough to add a little clarity to the first episode in its entirety.

It all kicks off with a dilemma for the Doctor as he arrives on a battlefield to try to rescue a kid from a dangerous collection of hand mines (underground hands with eyes in the palm that suck you underground to meet your doom), which have surrounded him. It all gets serious when the kid tells him his name is Davros, setting the scene retrospectively for one of sci-fi’s biggest arch-rivalry first meetings.

Leaving the situation unresolved we track forward to more modern times with the Doctor hiding out from his own doom as Davros sends out a slithering alien creature in a brown hood and a freakishly smooth gait to track him down for a final showdown. With his loyal companion, Clara Oswald, drawn into the fray by the miraculous reincarnation of Missy on the Dalek home world of Skaro, you’d think things were on for an epic return for Doctor Who.

The problem is that it all somehow failed to inspire, move or impress us all that much, leaving more than a little hopeful expectation in the wake of the excitement we had before the start of the series. In all fairness, the first episode is part one of a two part story, so it’s possible the closing half will turn things around, but if it doesn’t we’ll probably start to get a little concerned.

There are three main theories for our general disillusionment with the first episode of Series 9 and the biggest in terms of news for the show is the impending retirement of Jenna Coleman from the show. Knowing that she’s going to be toddling off to star in some ITV drama about Queen Victoria just sounds all wrong and taints the opening story in the new series. Perhaps that’s why only 4.6 million viewers tuned in to watch the first episode compared to 6.8 million for Peter Capaldi’s full debut in Series 8 last year. However, the fact that it was the opening weekend of the Rugby World Cup and team GB’s semi-final thriller with Australia in the Davis Cup probably had a hand in the matter too.

The second kill joy for us is that the episode is so stuck in the well trodden path of it’s length history that it feels a little on the well done side. For the start of a brand new series, we’d be happier with something completely fresh and new, like we got last year with Deep Breath. Instead, we get a story that comes across as being a little worn and loose. We’ve also long harboured a guilty dislike of visual impact of Davros as a character, which old-school loyalists would probably stone us for, but to be honest he just looks a bit too retro to instill anything other than nostalgia. It wouldn’t be too bad if he’d had a decent reboot makeover, but he still looks a bit like he’s been molded out of ancient prophylactics, so you can’t help but be a little deflated when he first appears.

The final element of our triptych of frustration is that there’s just a bit too much carefree abandon on the part of the Doctor when it comes to Missy. She quite merrily kills guards, but still the Doc manages to flirt and fuss over her like a little lost puppy. It’s just not very Doctor-like for him not to care more about stopping her and rescuing people and we’d be happier for him to return to his ultra-altruistic state of saving everyone he can by stopping all the nasties in the universe with as much gusto and spirit as he can muster.

While the second episode of the series did salvage the story a little, it was far from a perfect start to Series 9 for us. The replacement of the sonic screwdriver for a pair of wayfarers, which Peter Capaldi waggles to get it to do anything vaguely high tech isn’t the best and Davros always looks a bit too much like a puppet to impress. However, there are some positives in terms of the new potential directions for the Daleks and the addition of Colony Sarff to the mix.

Luckily, Episode 3: Under The Lake arrived with a brilliantly ghostly sci-fi story to pull things back around somewhat and it was followed up well with the second part of the Toby Whitehouse story, Before The Flood. The series developed further with a brilliant introduction for Maisie Williams in a viking adventure with an alien attack twist as Episode 5: The Girl Who Died brought us our first historical period outing for the series. The two-part story continued the following week, taking us to 17th Century England where Maisie’s character, Ashildr, has become jaded with her immortality. Entitled, The Woman Who Lived, it’s a fun historical Who with Lenny the Lion alien invaders, highway robbers and the addition of Rufus Hound into the mix.

However, the Zygon’s always spoil the fun a little for us and they did it again in Episode 7, which fails to deliver on the momentous momentum that Series 9 had started to build up. Sadly, it sort of continued on into Episode 8: The Zygon Inversion, which tried a bit too much geo-political subversion to come off well, despite some very strong doppelganger action from Clara.

Things got back to their best in Episode 9: Sleep No More, written brilliantly by Mark Gatiss and directed just as well by Justin Molotnikov. Featuring an abandoned space station in orbit around Neptune it had shades of Under The Lake, but with a space monster storyline it was another sci-fi classic from the show. It introduced Reese Shearsmith (Inside No. 9 Series 3) to the series and hopefully we’ll get to see a lot more of him in Doctor Who over the coming years.

The series comes to an epic crossroads in the 10th episode, Face The Raven, which finally saw Clara taking her bow from the show. It makes for a very fitting episode for her exit as she gets the sendoff that she deserves, while setting things up for a momentous finale to the series.

The final two episodes in the series continued the run of form that had started in Sleep No More, building on the momentous developments in Face The Raven and the Ashildr story arc. Episode 11: Heaven Sent sets things up in mind bending terms as the sheer enormity of the situation comes home to roost in the Doctor’s confession tablet confinement. It’s followed by the drama, action, CGI heights and emotional heart strung tugs of the last episode in the series, Hell Bent.

While there have been a number of episodes that haven’t impressed us as much as others, in terms of a full twelve episode series, it’s been a lot of fun going along for the wild ride of it all. There have been ghostly spectres, sinister villains, daring rescues and tear jerking losses, and we can’t wait to see what happens next.