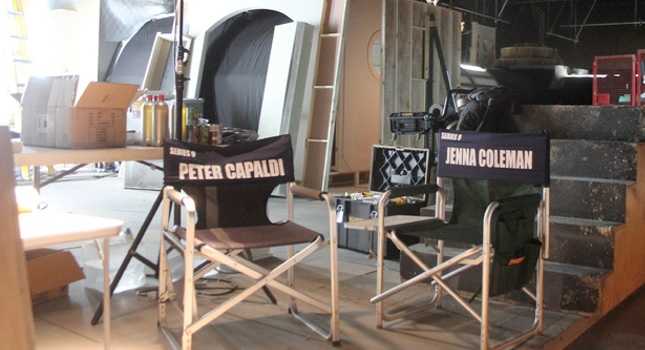 Fish around in your jacket pocket for your Sonic Screwdriver and get ready for another epic outing for Peter Capaldi as the BBC has announced details for Doctor Who Series 9. As well as reiterating the ongoing onscreen partnership of the actor with Jenna Coleman with a shot of their empty chairs on the set of filming (check out the image above), the Beeb has also revealed a few nuggets of information about the guest cast members that will feature in the new series.

However, the bad news for die hard fans is that you’ll have to wait until later in 2015 to see any of the action on the telly box as the air date has been confirmed for Saturday the 19th September 2015. On the positive side, it does give us something to look forward to when the colder months begin to set in, but all we’ve had throughout the earlier part of the year will be a super-massive black hole of time and space in which we’ll have to entertain ourselves with episodes from past series and a diet of fish fingers dipped in custard.

Filming is already underway in Cardiff, with the cast returning to their roles as the cameras started to roll once again in January 2015. Considering the fact that it has been raining solidly in the Welsh capital all the way through January, we’re expecting it to be a pretty dark, dank and dangerous comeback for the show and that’s been added to by the recent news that Missy will be back too.

She’ll be starring in the opening two-part story written by Steven Moffat, episode 1 The Magician’s Apprentice and episode 2 The Witch’s Familiar. Peter Bennett has been given the producer responsibilities for the opening episodes with Hettie Macdonald as the director.

However, the first episodes to go under the clapperboard at Roath Lock Studios for Series 9 were for the two part story written by Toby Whithouse (Being Human) and it’s already been described by Moffat as one of the scariest adventures in Doctor Who history, which is no mean feat when we’ve had the Weeping Angels, Darleks and Silents freaking things up in recent years. The creepy double episode will be produced by Derek Ritchie and directed by Daniel O’Hara, also of Being Human fame.

The guest cast announced for the episodes includes Paul Kaye (Game of Thrones), who needed to go through five hours of make-up every day to get into character, so we’re expecting something pretty special. He’s added to by Morven Christie (Grantchester), Arsher Ali (Four Lions), Colin McFarlane (Torchwood), Sophie Stone, Zaqi Ismail, Steven Robertson and Neil Fingleton. More updates on the rest of the series guest cast members is expected shortly, so we’ll update as soon as we have the details.

Other guest cast members confirmed for the series include Maisie Williams, also of Game of Thrones fame, British comedian Rufus Hound, Jemma Redgrave, Kelly Hunter, Clare Higgins, Jaye Griffiths, Daniel Hoffmann-Gill, Jami Reid-Quarrell, Aaron Neil, India Ria Amarteifio, Joey Price, Dasharn Anderson, Harki Bhambra and Demi Papaminas. There’s a lot of speculation about the character that Maisie will be playing following the recent release of a the Doctor Who Series 9 teaser trailer, so we’re looking forward to seeing how it all turns out when it hits the TV screen this Autumn.

If all of that isn’t enough, the BBC has also confirmed that River Song will be returning to the series in the Series 9 Christmas Special, which will air on Christmas Day 2015. It leaves a lot of questions from fans about she’s going to come back from the dead, but with time on her side it’s pretty easy to make a few accurate guesses.

Doctor Who Series 8 saw Capaldi taking the helm of the T.A.R.D.I.S for the first time and in all fairness he did a pretty good job in the role, which was a significant departure for the The Thick Of It star. While his past appearances in both Doctor Who and Torchwood stood him in good stead to make the step up into the lead role, the fact that he played a World Health Organisation (W.H.O.) doctor in the zombie action horror World War Z was easily the biggest indication that he might have been the right man for the job. Read our Series 8 review for more information about how we rated it, but in general we’re pretty excited about the prospect of Series 9, especially after the release of the teaser trailer below.

Share the Doctor Who Series 9 air date, cast details and trailer with: