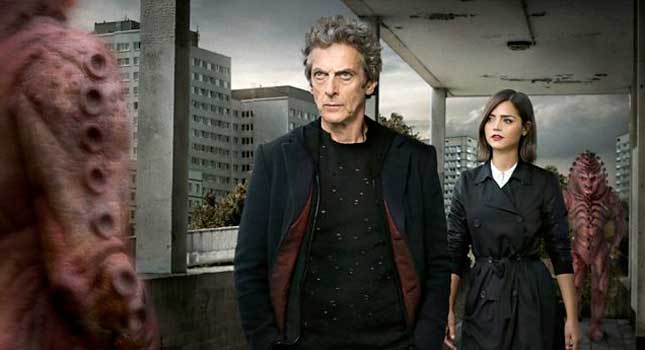 It’s probably easy to explain our slight ambivalence to Episode 7: The Zygon Invasion with the knowledge that the Zygons are our least favourite of the Doctor’s intergalactic enemies. Not only do they look a bit rubbish, but they’re also a million miles away from having the same momentous impact as other big hitting baddies like the Daleks, Cybermen, Weaping Angels or Silence, so we tend to grown a little at the prospect of an episode that features them at the centre of the story.

However, they’re sort of not meant to be out-and-out villains, acting more like mirrors on humanity, so perhaps we’re being a little harsh on the big blobby-headed face robbers. Our biggest issue is that they look a bit naff, more like a dude in a costume than an advanced and complex alien race with their own fight for survival to work on. As a result we tend not to buy into them all that much, which makes it easy to lose interest in the episode.

On a more positive note, writer, Peter Harness, has put a lot of effort into building in some of the complexity behind race relations that have got very clear parallels in real life. The story centres on the breakdown of a peace accord between the humans and the Zygons as a splinter faction revolts against the apparent shackles of the truce and their hidden existence on earth. There’s joke references from the Doctor about them stealing our jobs and rational debates about atrocities and the impact of perceptions and propaganda on the way people behave, which all feels very relevant to modern day socio-political problems.

However, there are a couple of instances when this becomes a little too stretched to make a point, which wasn’t really needed. When the soldiers are going after the Zygons, about to shoot them down, they end up giving up because they adopt the faces of their family and loved ones. This would have been fine if they hadn’t then also been lured to their death as a result, which seems way too far fetched to fill well into the series. It just ends up with a mixed message, which starts with the premise of what would you do if they were your family and ends with a heap of scorched mounds where once there were soldiers.

There’s also a flippancy to the episode, which is a little to be expected from the character direction in the series, but doesn’t feel quite right this time around with such weighty topics underlying the episodes story. This is all the more at odds in The Zygon Invasion when you also take into account (SPOILERS ALERT!!!) that Clara bites the dust towards the end of the episode. It’s not impossible that this could be a clever decoy death and that somehow she’ll be restored to life in next episode, The Zygon Inversion, but it’s also possible that Clara is no more and all we’ll have of her for the rest of her stay is the Zygon shadow of her former self.

It’s genuinely a shame that Jenna Coleman is leaving the show as she had built up a very strong on-screen relationship with Peter Capaldi, but it’ll be more of a shame if she has been written out in Episode 7, because it lacks the momentous delivery to give her passing the credit it deserves. The episode doesn’t stack up as well as the previous two entries in Series 9, but with the second of the two-part story going out next week there’s at least some scope for a reprisal.

< Episode 6 – The Woman Who Lived review

Share our review of Doctor Who Series 9, Episode 7: The Zygon Invasion with: