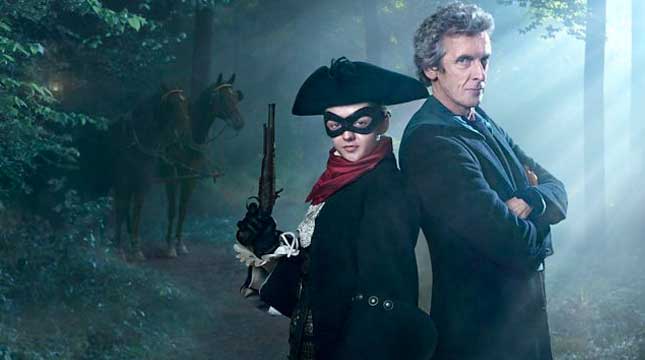 The closing half of Maisie Williams’ two-part introduction to Doctor Who Series 9, The Woman Who Lived, continued the rising form of the 2015 outing for Peter Capaldi. Picking up on the aftermath of where things left off at the end of The Woman Who Died, it’s another fun period adventure for The Doctor, fast forwarding to England in 1651 and the life of a highway robber called The Nightmare.

While it’s not the most intense outing so far in Series 9, it does continue to pile on the drama around Clara, despite the fact that she’s not actually in the episode all that much. The Doctor looks more and more worried about her well being as the episodes fly by and Maisie Williams’ presence and requests to be his new TARDIS companion only adds fuel to the fire-like speculation around how Clara is going to be written out of the series.

The episode sees The Doctor landing in the middle of the 17th Century in woodland outside London on the hunt for an otherworldly object that has piqued his interest, but he’s not alone in the hunt. Highway robber The Nightmare is already a step ahead of him, just about to take the booty from a stagecoach, but the Timelord arrives just in time to bungle it for the both of them only to reveal that the highwayman is actually immortal Viking girl Ashildr from the previous episode.

It makes for a cute episode with a playful storyline that allows for as much insight into The Doctor’s psyche is it does Ashildr, who has renamed herself Me after a series of lifetimes of loss and loneliness. The addition of Lenny the Lion, Beauty And The Beast lookalike baddy Leandro gives the outing a bit of focus to drive it to its alien invasion conclusion, throwing The Doctor and Lady Me together for the final throws of the adventure.

Maisie Williams and Peter Capaldi work well onscreen together with some good dialogue that manages to be wry and heartfelt. They’re added to with comic relief from Rufus Hound, who plays The Nightmare’s rival highwayman, Sam Swift, who finds himself on the gallows before the day is done, trying to quip his way out of the noose.

Both Me and Swift are probably going to go on to be recurring characters in the series and they should make a welcome addition with Maisie’s burgeoning acting credentials and Rufus Hounds humour. It’ll be interesting to see how their stories develop later in the series, especially Me’s with the portentous ending to Episode 6 on Saturday night.

The Girl Who Lived is another future classic from the sci-fi series with some impressive costumes, in particular for Leandro, ramshackle special effects that just about work and a solid storyline. Written once again by Welsh playwright, Catherine Tregenna, it kicks things up a notch for Maisie Williams and the developing mist over the future of Clare in the show. It sets things up well for more intrigue and adventure and adds a little nudge in the right direction to our overall Doctor Who Series 9 review.

< Episode 5 – The Girl Who Died review

Share our review of Doctor Who Series 9, Episode 6: The Girl Who Lived with: