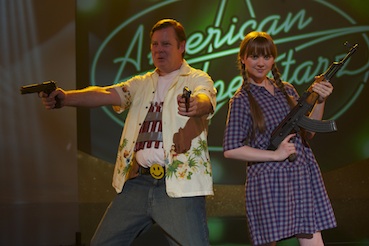 God Bless America didn’t light it up much during it’s cinema release, but there’s a pretty good probability that if it hadn’t been for the releases of both Kick Ass and Super it would have had more of a shock and awe impact. With ultra violence, juvenile retribution and a carefree hatred of all things that are wrong with the world, the upcoming DVD release is a sure fire shot for fans of the growing genre.

The film focuses on the slightly over-baked breakdown of Frank as he is diagnosed with a brain tumor at a time of loneliness and general depression at the state of play in the world. Throw in a little US gun love and you have a man on the edge marauding through life enacting retribution for the general wrongs that have been committed. 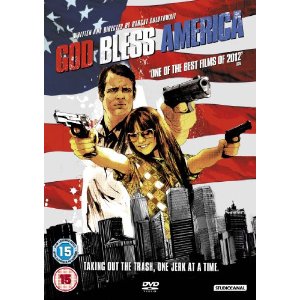 As he’s joined by homicidal, high school student, Roxy, the retribution ramps up to a boiling point. Cruelty, stupidity, intolerance and general ignorance all are met with the cold disdain of death as the pair paint the country red.

The God Bless America DVD’s release date was the 9th July 2012, adding a new deathly gaze to the armoury of ultra-violent vengeance films. Though the blood bath is incredibly realistic, the delivery is sliced with the trademark edge of the outrageous, highlighting the allegorical concepts that underpin films of this nature.

There’s inevitably going to be those that see the God Bless America DVD as an unnecessarily violent addition to film history, but then the writers probably see the stupid intolerance and general self indulgence that’s a big part of society as a legitimate target.