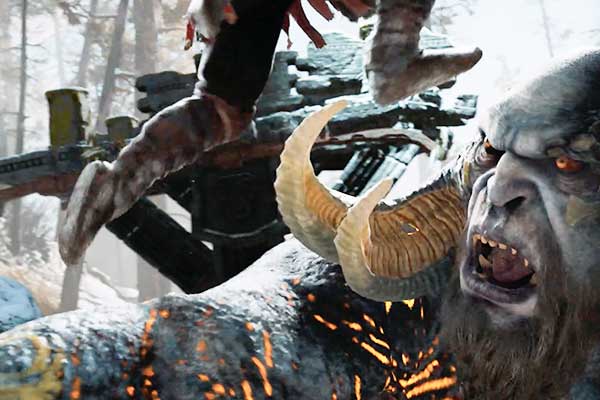 Here it is, God Of War has finally arrived and it doesn’t disappoint from the action in part 1 of our walkthrough, which you can see in full in the video below. It’s got incredibly cool opening cinematic sequences that set up the mystery of the game’s story and then to cap it all of there’s a huge boss fight with behemoth troll Daudi Kaupmadr.

Luckily, there’s a little time in the opening sequences to get used to the movement of Kratos and the fight mechanics, which are pretty sweet. It’s a unique system which features the right and left trigger buttons for all of the action, as opposed to the circle, x, triangle and o mashing that we usually get in games. While that can throw you for a second, it doesn’t take too long to get used to and when you do it’s very satisfying.

While a lot of the opening sequences in God Of War are given up to cinematic setting and story moments with Kratos and his son Atreus, there’s also a fair good amount of action. Once they’ve said a brief, but emotionally charge goodbye to Atreus’ mother, they head out into the forest on a hunt.

Kratos is essentially testing Atreus for a journey that they will need to take, and you’re told early on that something has changed in the forest, so trouble doesn’t take too long to arrive. The first enemies that you’ll encounter are Draugr’s and the make pretty good fight fodder for you to practice on. For the most part, you’ll be able to hack them down with R1 and R2, but you might need to throw in the occasional L1 block if they come at you in numbers.

You can also launch the Leviathan Axe at them by aiming with L2 and firing it with either R1 or R2. Most of the actions are explained pretty well on the screen, so you shouldn’t have too much trouble getting through this section. Although, you can look for health stones on floor and pick them up with circle to give yourself a boost if you need it.

Once you finally catch up with the deer you’re hunting with Atreus, you’ll have a little section where you need to take control of his bow to shoot it. You won’t be able to hit it with a head shot, no matter how much you’ve been practicing in Far Cry 5, so just get it in the side and this will cue up another cinematic. The culmination of this is the arrival of the troll Daudi Kaupmadr, which is a beast of an early game boss to take on in our God Of War walkthrough part 1.

How to beat the troll Daudi Kaupmadr

It may not be unstoppable, but troll Daudi Kaupmadr isn’t a pushover, no matter how strong Kratos is. It fights with a huge stone, which it jabs at you across the floor and then smashes down on your head. Circle it and roll out of the way of these attacks with x. This will then give you an opportunity to hit it with R1 and R2 attacks.

Cycle, rinse and repeat to finish it off for the most part. However, you can also chip away at it with Atreus’ arrows by pressing square, but you only have three of these in each wave until they regenerate. If you use Atreus to distract it with arrows, it’ll head after him, leaving you free to fire the Leviathan Axe at it and drive down more of its health.

Once Daudi Kaupmadr is out of energy, you’ll get to perform a finisher by clicking down on L3 and R3, which will see Kratos driving it to the ground and snapping its neck. It makes for a cool ending to the boss fight, which is one of the most impressive early battles we’ve seen in a game in a long while.