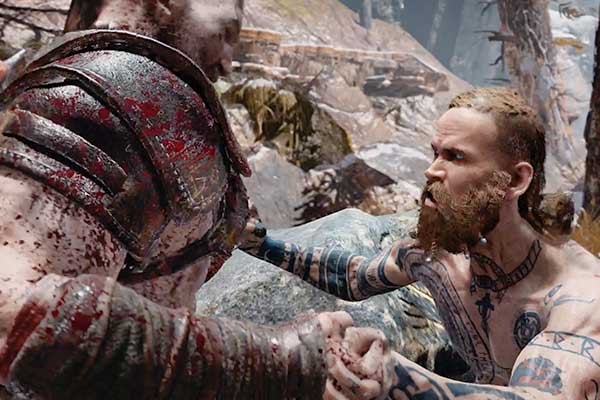 Once you defeat the troll Daudi Kaupmadr, you’ll need to work your way back to the house with a slightly dejected Atreus, who Kratos believes is not ready for the task ahead. On the way, you’ll have a few simple Draugr’s to fight along the way, but the skills you picked up in the opening section of the game should be enough to see you through. The biggest challenge to come, though, is the Stranger that appears at the house when you eventually get back.

You’ll also get a new test with the appearance of flame throwing Draugr’s, which you should take out as quickly as possible to prevent them shooting at you while you try to fight the rest of their kind. You can either fire your axe at them, get Atreus to shoot them down or simply rush them with some Leviathan Axe swings. They don’t have much health to whittle down, but some of them can be out of reach on ledges, so you’ll be better off getting them with projectiles.

However, things get a little more tasty when you come up against another new enemy in the ice Draugr’s, which look a lot like they’re a precursor to White Walkers. Attacking them with your axe deals zero damage, so you’ll need to drop throw it and leave it where it is, or sheath it to fight them with Kratos’ bare hands. Once you do this they’re fairly easy to beat.

This will then see you getting back to your house in the woods, but no sooner do you settle down for a father son chat about what happened with Daudi Kaupmadr there’s a rumble and a knock at the door. Sending Atreus to hide under the house, Kratos answers alone to find an obnoxious Stranger at the door.

After a little exchange where you only find out that he’s a super-powered deity-like figure sent by Odin, you’ll have to fight the Stranger and he’s a whole lot tougher than he looks. He also manages to come back from what looks like certain death to face you in three rounds of combat, so you should settle in for an epic boss fight.

You’ll need to block his punch attacks with L1 and counter with everything that you’ve got to chip him down each time. However, there are a few attacks that can’t be blocked like when he disappears into an icy wind and rushes you. For this, you’ll just need to dodge out of the way as best you can.

It’s all about dodge, block, move and counter attack with the Stranger and you should be able to beat him with a little perseverance. You can see us taking him down in the video above in case you need a few more tips. Throwing the Leviathan Axe is a possibility, but you won’t find it as effective as it was against Daudi Kaupmadr in the first part of our walkthrough guide.

Who is the Stranger?

The Stranger is an enigma when you face him and it remains that way even after you’ve managed to beat him, which makes us think that we’ll probably see more of him later in the game, despite the broken neck. He may not be much of a trickster, but our bet is that he’s none other than Loki and that there may well be some shape shifting and trickery on the way later in the game.

Other options include Hermóðr, messanger to the gods in Norse mythology, and Odin’s brother Vili, who wore silver. The Stranger definitely deals a message from Odin, but he doesn’t have that much in the way of silver, other than the little beads in his beard.