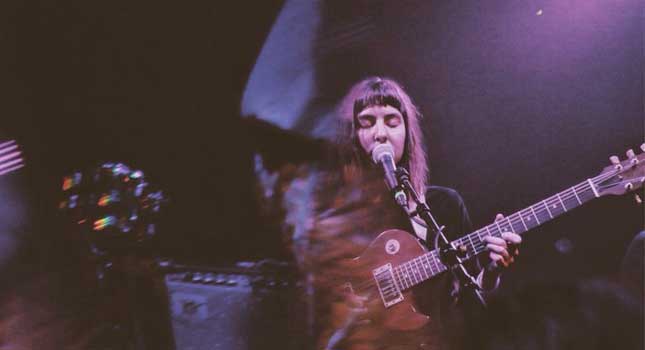 Mothers – fresh off the release of their debut LP When You Walk A Long Distance You A Tired – were the conclusion to an excellently run event put on by Clwb Ifor Bach and Wichita Recordings known as The Wichita Sunday Social. The event provided listeners with a palette of live music from the label including DJ sets by Los Campesinos! and a surprisingly touching performance by US psych-folk artist Globelamp, but the definite highlight and attraction for the event was the experimental folk-rock outfit Mothers. Following a healthy amount of buzz on the Athens, GA music scene and good reception for their debut LP they embarked on a European tour that (un)luckily landed them in Cardiff. The venue was rather small, but had the stage on the same level as the crowd which allowed for a much more intimate experience. There was a sense of trepidation in the crowd before Mothers played, but this was extinguished by the way they approached the stage. They approached the stage with a maturity and confidence that was unexpected given the fact that this was their first tour of Europe; it was a confidence that translated into an excellent live performance.

What struck me most about the live set-up of Mothers was not just their musicianship, but their ability to occupy and dominate a space with their music. The opening notes of album highlight It Hurts Until It Doesn’t were the perfect way to start the set. The track allowed the band to showcase their musical talent and allayed any fears the crowd may have had about their live performance or, judging by the amount of people who were ‘just [there] for a look’, enamoured new listeners. The track also showcased front-woman’s Kirstine Leschper’s ability to dominate the stage. It was difficult to believe a band who was just uploading pictures of Welsh words to Instagram moments before their set were now putting in such a mature and measured performance. The intricate math rock riffs and percussion translated perfectly live, but still paled in comparison with Leschper’s vocal performance.

The vocal delivery of Leschper was the most striking part of the performance and the band’s music as a whole. Her vocal range and delivery was clearly there to hear on the record, but seeing the band live truly contextualised her vocal abilities. The vocal highs she hit on Copper Mines allowed me to appreciate the song more; the live setting certainly re-contextualised the album for me. At the conclusion of the set, Leschper was left alone with her guitar. It was during this final song where it became explicitly clear that Leschper was the heartbeat of the band; the rest of the band leaving the stage was a figurative gesture to highlight Leschper’s essential role in their music.

What the gig and event showed, too, was the importance of Clwb Ifor Bach to the Welsh music scene. Time and time again the venue manages to attract a range of different bands and musical acts whilst accommodating a space for local music to thrive. I was surprised that Mothers were even touring near Cardiff until I read they were at Clwb Ifor Bach; the legendary venue still has a pull for local and international talent. The promoting team at Jealous Lovers Club, too, deserve special mention. In many ways, Clwb Ifor Bach is a lifeline for the Welsh music scene and should be appreciated more than it is. It’s a shame the cans of Red Stripe there are criminally overpriced, though. It’s a good thing the bottles of beer are so cheap to keep my latent alcoholism running.

You can catch Mothers next in the UK on the festival circuit, they’ll be playing both Green Man Festival and End of the Road Festival. If you want to know why I’m raving so much much about this band then stream their album When You Walk A Long Distance You Are Tired on Bandcamp. Go on, check it out, it’s free! You can also check out the live events at Clwb Ifor Bach here.