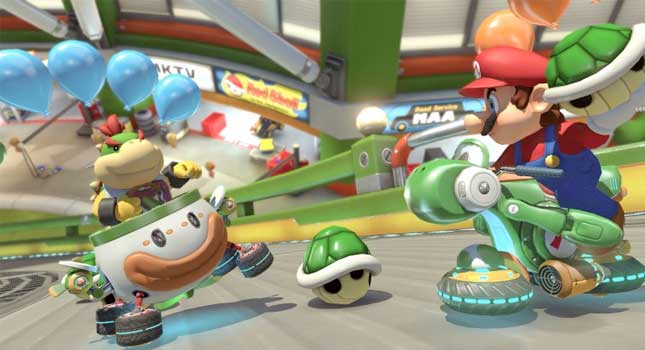 With every new Nintendo console, comes a new Mario Kart game. Things are a bit different this time though with Nintendo’s upcoming new console, the Nintendo Switch. Instead of a whole new game, the console is getting an enhanced port of the Wii U’s Mario Kart 8 which is titled Mario Kart 8 Deluxe. The Wii U game was highly praised in our review back in 2014, which you can read here, and on the Switch it promises to provide even more fun.

The racing game will feature plenty of improvements and new content. This includes upgraded graphics and new characters. All of the DLC released for the Wii U version will be included also, meaning that this will be the definitive version of the legendary racer.

The UK release date for Mario Kart 8 Deluxe is currently 28th April, where blue shells will once again threaten to hurt relationships. This will be one month after the big release of the Nintendo Switch. It’s unknown right now as to whether Nintendo will release a Switch console bundle containing the game, like the Wii U. The series does have a massive following however, so I’d say that a console bundle is a big probability.

All of the default characters from the original game return, along with the 6 DLC characters including Tanooki Mario, Cat Peach, Dry Bowser, Link from the Zelda games and The Villager and Isabelle from the Animal Crossing games.

If 36 characters wasn’t enough however, Mario Kart 8 Deluxe welcomes a further 5 new racers to the track. This takes the total to 41 shell-wielding maniacs. The new additions are King Boo, Bowser Jr, Dry Bones and, from the Splatoon games, Inkling Girl and Inkling Boy. It was surprising that King Boo and Bowser Jr missed out on participating in the Wii U version, but fans will be delighted with their inclusion this time round.

The gameplay of Mario Kart 8 was hugely popular with fans, yet it has been further improved and has had some new additions added for Mario Kart 8 Deluxe. The main new feature, as heavily seen in the announcement trailer, is an enhanced Battle mode. This is a mode that did appear in the Wii U version, although it was rather limited with only one game type and, unusually, no battle arenas with the regular race tracks used instead.

On the Switch, battle arenas make their return with both new and classic arenas with five currently confirmed. Joining the Balloon Battle game type will be four new game types. Three of these have yet to be revealed, but they will involve coins, Shine Sprites and Potted Piranha Plants. The one game type revealed is Bob-omb Blast, returning from Mario Kart: Double Dash!!. Improvements have also been made to the way the balloons work, including players now starting with five balloons instead of three and they now have the ability to respawn after all balloons are popped.

Another major addition is the ability for characters to carry two item boxes at once, with the Double Item Box returning from Double Dash!! because of this. In case you’d started to fall behind on the track thanks to those dreaded banana skins, yes, you can choose to be so reckless as to combine a blue shell with a Bullet Bill rocket. On the subject of items, all options from the Wii U version return along with two more classic ways to take out your opponents which return to the series. These are the Cape Feather, exclusive to Battle mode, and Boos. The Feather enables the player to jump over obstacles or steal balloons from opponents, while Boos steal items from the nearest racer while giving the player invisibility.

There are no new racetracks, although all 48 tracks from the Wii U, including DLC, return. All the vehicles also return, but with three new body parts which are the Koopa Clown, Splat Buggy and Inkstriker with the last two being inspired by Splatoon.

A new assist feature has been introduced for beginners to the series, titled ‘Smart Steering’. This helps to make driving and staying on tracks easier for people, such as children meaning that Mario Kart is now easily accessible to people of all ages.

In our review, the karting masterpiece on the Wii U was described as having the “most detailed and perfectly animated graphics in the series”. Well, with the power of the Nintendo Switch it’s safe to say that this newest version will now own that claim. The courses and characters are more detailed with bursting colours. It looks like a game that was developed for the new generation of consoles. The render quality of the game has been improved, meaning that fast paced races will run more smoothly which is very useful with all the action that can occur in your typical Mario Kart race.

The Nintendo Switch’s game line-up for the first few months of its life may be a bit light, but Mario Kart 8 Deluxe is currently one of the most appealing games it has. The game looks like an improvement over the Wii U version in every way and may be worth buying for anyone who buys a Switch, even if they own the original game because of major additions like the enhanced Battle mode. It’ll be the best way for families to try out the new console, just use blue shells at your own risk of expensive controllers being smashed.