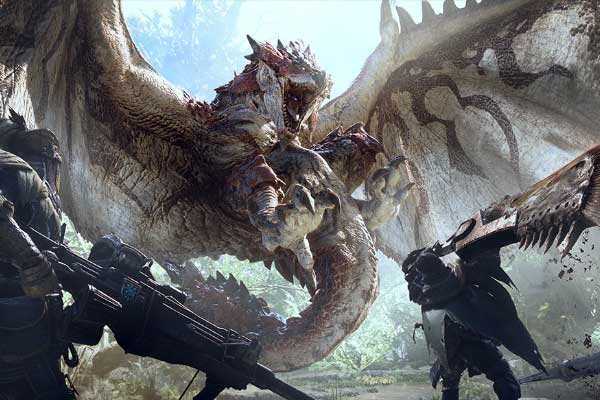 The time is finally upon us, monsters have raided new gen consoles. That’s right, the massively popular Monster Hunter franchise is coming to PS4 and Xbox One in the form of Monster Hunter World. The latest game promises to offer the ultimate hunting experience for fans and newcomers alike with a large open world at their disposal.

Due to the game’s development for PS4 and Xbox One, Capcom has tried to make World more appealing to Western audiences than any other Monster Hunter game. There’s worldwide online play for the first time ever, many open world areas with seamless travel and much more.

The UK release date for Monster Hunter World is the 26th January 2018 for PS4 and Xbox One, so any New Year resolutions of becoming a hunter will quickly become a reality. A PC release date is yet to be announced.

Pre-order bonuses for the game include the Origin Armour Set and the Fair Wind Charm, a piece of equipment which increases attack power and reduces damage taken. There is also a collector’s edition, featuring multiple extras in a deluxe kit, a figure of the Nergigante monster, the game soundtrack and art book. Also, PS4 owners will be lucky enough to receive Aloy from the critically acclaimed Horizon Zero Dawn as a playable character. Plus users get a demo to enjoy on the 9th December to add to this.

Monster Hunter World follows the story of a player-controlled hunter, a member of the Research Commission’s Fifth Fleet which have been deployed to a land named the New World. This is a land which mysteriously becomes populated with elder dragons once every decade. The Research Commission are determined to find out the cause of this strange tradition. The player is in pursuit of the elder dragon Zorah Magdaros, being tasked to kill or capture a variety of monsters for the Astera base while on this journey.

The story mode is driven by a quest system, which starts from ‘low rank’ quests to ‘high rank’ quests with the difficulty increasing. This system carries over between single player and online, which can be played with up to 4 players. There are also side quests to add to the narrative, called Bounties and Investigations. Major characters on the fleets from the Commander to the Handler will assist players throughout the game, with the Handler acting mostly as a tutorial guide.

The third-person action RPG is looking like a gorgeous game with two months to go until release. The open world environments are stunning with plenty of life in the form of flowing nature and wildlife. It’s clear that there is much to explore in this huge world. The graphics are ultra-high resolution and are given a further boost if World is played on a PS4 Pro or Xbox One X. The wait for a new gen Monster Hunter certainly looks to have been worth it.

Each monster in the game has a unique appearance and are all well detailed with many different features on display. Some may appear cute to players but that’s just to get them to drop their guard before being on the receiving end of a vicious attack. However, these cat-like species Palicoes are some of the most adorable characters players will ever see, and thankfully they’re companions.

In World, players customise their character’s attributes by what equipment they give them. There are different archetypes of weapons, ranging from gun to bow, and each one gives their character unique combat moves, abilities and armour. It’s important to know that matching armour sets will give a boost to combat skills.

Specialised tools are items that can give players powerful effects for a limited time when activated. Up to two can be equipped at once. Some equipment can be bought with in-game currency, but the rest needs to be built from loot which can be earned in a number of ways. It can be earned by slaying/trapping monsters, completing quests or simply exploring.

All 14 weapon types return from the last main game in the series, Generations. These types include hammer, switch axe and bowgun. If you wish to change your weapon class during combat, you can do just that for the first time ever in the series. Players also have access to the Slinger, a grappling hook and slingshot useful for either navigating areas or stunning monsters. There’s the Mantle, which is like camouflage clothing, allowing players to either hide from monsters or lure them into traps. Scout Flies are incredibly helpful little beings, assisting players with monster locations and where to find other resources such as loot.

There are multiple different areas in the game world, from the Ancient Forest to the Coral Highlands, with each areas having a set of numbered zones. Every area has a dynamic day-night cycle which will affect the behaviour of monsters. Going hunting at night may not be such a smart idea, though.

Speaking of behaviour, monsters do react to one another so the slightest bit of interaction could lead to a clash of titans battle which can definitely benefit players. Environmental destruction features too, with both hunters and monsters being able to leave paths of chaos. Sometimes, new routes and areas can be discovered by destroying a piece of land.

Base camps are the safety zones in World, where players can freely change their equipment, restock etc. They can all be quick travelled to also. Astera acts as the central hub where players can gain new quests, craft equipment and more. There’s enough to retreat to if the world of monsters gets too much.

The online play for Monster Hunter World seems like it’ll be a lot of fun. As what was mentioned earlier, the story quest system carries over across to online from single player. One big difference between the two modes is that single player hunters have a Palico to assist them in combat, while online hunters can call in for help at any time thanks to a drop in/drop out system. Squads are supported in the game making it easy to join friends for hunting sessions.

Monster Hunter World is looking very promising, for both hardcore and new players thanks to the Western crowd target audience. The gameplay looks as enjoyable as ever for the franchise, with the immersive open world and many brutal monsters surely providing hundreds of hours of fun. There are plenty of possibilities for players with multiple ways to play the game. This could very well be one of the main staple games of 2018 due to the sheer amount of content anticipated. Get your swords at the ready, because the New Year is bringing in monsters to slay.

You can check out the gameplay for the boss-a-thon with our Monster Hunter World walkthrough and you can see the rest of the action on the Tuppence YouTube channel.