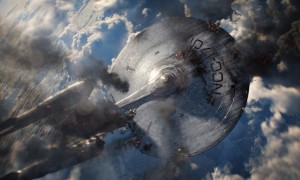 For Star Trek fans, the release of the Into Darkness DVD and Blu-ray is pretty much a locked on, dead cert’ addition to the collection, but equally it’s got a lot going for it for the none Trekkies among us too. Starring Chris Pine (Star Trek 2009) as Captain James T. Kirk, Simon Pegg (The World’s End) as Scotty and Benedict Cumberbatch (Tinker, Tailor, Soldier, Spy 2011) as the nefarious Kahn, it’s got enough big names behind it, but the thing that really matters is that the film impressed on a number of levels making the DVD and Blu-ray release one for any sci-fi adventure lovers.

Set for release on the 2nd September 2013, Star Trek Into Darkness, as the name would suggest is one of the darkest Star Trek movies ever released. The last time the cinematography and characterisation pulled off this much punch for the boldly going movie franchise was the last time Kahn made an appearance in Star Trek 2 The Wrath of Kahn in 1982.

The story follows on directly from the the 2009 reboot of the series, but it also acts as a sort of prequel to the storyline of the Star Trek 2. When Kirk manages to get the crew of the Star Ship Enterprise into trouble for bending the rules of the Prime Directive thanks to a very detailed report filed by Spock (Zachary Quinto), he’s stripped of his captaincy. However, when the threat of Benedict Cumberbatch’s Kahn drops like a sledge hammer on Star Fleet the crew get a chance to reprieve themselves and get Kirk back in the Captain’s char.

Quinto makes a very convincing Spock in the rebooted series and he’s particularly good in the latest release, especially with the side story of a relationship with Uhura, played just as well by Zoe Saldana. Chris Pine is starting to fill the shoes of the Captain quite well bringing together his fractured rule breaking, gung-ho, brawling and womanising self to life in a way that gives much more credibility to the new incarnation.

The keystone of the new Star Trek film is Benedict Cumberbatch’s performance as Kahn. He’s menacing, seemingly indestructible, deceptive and single minded, which creates a villain worthy of the original. He’s a big part of some of the epic battles and fight scenes that take place and he provides the much needed nemesis for Kirk.

There’s also a much improved conceptualisation of the Star Trek mindset of old in Into Darkness, taking it away from the American guts and glory theme that seemed to dominate and mire the 2009 entry. It manages to centre itself better in the morality of Star Trek better, instead of flying in with a shoot first, ask questions later mentality that dominates the first reboot series movie.

The Star Trek Into Darkness DVD and Blu-ray release is definitely one to watch if you missed it at the cinema. It’s packed with action, a great bad guys, credible storyline and awesome effects. While Simon Pegg’s performance as Scotty will probably get a little annoying and the opening scene with the odd alien tribe isn’t exactly a stellar beginning for the film, as a whole it’s one that could easily be watched more than a few times if you’re a trekkie or sci-fi adventure film fan.