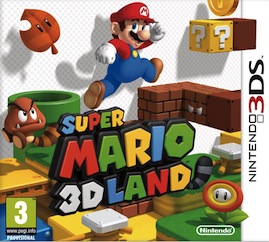 News about the prospect of the first Super Mario 3DS game was a little slim on the ground from the guys at Nintendo when it was first announced. We’d known about it since E3 in 2011, but luckily detailed announcements for the game weren’t too far behind it, along with the full release.

Launched on the 18th November 2011, it went on to be called Super Mario 3D Land and it literally looks amazing considering it’s played on a hand held console game. However, as always, it comes down gameplay with platfromers in particular and Mario’s first 3D adventure on a hand-held system turned out to be thumb-blisteringly good.

Super Mario on the 3DS is a hybrid of elements from Super Mario 64, Super Mario Sunshine and the more recent Super Mario Galaxy games spliced with the fixed level and flag goal concept of the 2D platformers. It’s definitely one of the best looking 3DS games to grace the little device and it was one of the first to be created solely for the hand held console.

The animation and graphics look really sharp and with gameplay on a par with the other 3D styled Mario games, it’s gone on to be a modern day classic. The price reductions for the Nintendo 3DS over the last couple of years has meant that a whole lot of consoles have been sold, which has given Super Mario 3D Land a pretty sizable audience.

The big addition for the game was the return of Mario’s Tanooki racoon suit tail from Super Mario 3, which has taken its place in the game in 3D glory. Apart from being incredibly nostalgic for any older gamers, it’s very cool to give Mario tail powered flight in any direction you fancy, as well as coming in very handy to give you more control over where you land with a slower fall thanks to the flapping tail.

With an average rating of five stars from customer reviews on Amazon and mostly 90%+ reviews from the press and computer games magazines, Super Mario 3DS has been a big par of the return of Mario to the top of the gaming tree where he belongs. In our review of Super Mario 3D Land we gave the game 4.4/5.

The game has also gone on to inspire the first Nintendo Wii U 3D Mario outing in Super Mario 3D World, which was released in the run up to Christmas 2013.