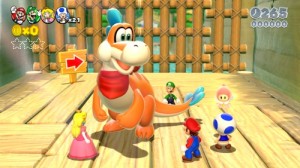 As a lot of you will already know, Mario will be getting his first 3D platform adventure on the Nintendo Wii U later this year, so here’s everything we know about Super Mario 3D World. With a whole new set of abilities and the added power of the U, it looks super slick in HD and with so much multiplayer action thrown into the mix, it’s bound to be one of the most entertaining 3D Mario games yet.

Set for a release date of the 29th November 2013 in the UK and Europe, and a little earlier in the States on the 22nd November 2013, Super Mario 3D World will inevitably be a big part of the seasonal gaming season for many gamers. It builds on the success of New Super Mario Bros. U and its recent Luigi expansion game, setting the console up for a lot of Mazza love in advance of the subsequent release of both Mario Kart 8 and Super Smash Bros. U in 2014.

This time around the storyline line is a little bit different. Not by much, but it is a slight side step away from your standard Bowser shows up and kidnaps the Princess sort of thing we’re used to. In Super Mario 3D World, Mario, Luigi, Princess Peach and Toad find a mystical clear warp tunnel and out of this flies the Sprixie Princess, but within seconds Bowser appears and steals her away, leaving the four characters with no choice but to jump into the Sprixie kingdom to rescue her. 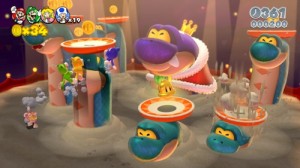 As you’d expect with a next gen system, graphics look pretty impressive for Super Mario 3D World. The levels are rich and detailed and the characters are as cute as ever. The only real negative to say is that it doesn’t look like it pushes the boundaries all that much, in that there’s clearly more potential in the Wii U than the game looks like it’s taking advantage of. You’ve only got to look at the likes of Pikmim 3 to see what the system’s capable of.

It’s not that there’s any specific bad points as such, it’s just that it doesn’t appear to have pushed the envelope as far as it could. While the graphics are clearly much sharper than on Super Mario 3D Land on the Nintendo 3DS, the game that inspired it, they’re not exactly light years away considering the extra power of the Wii U. The last time a Mario game really redefined gaming was the legendary Super Mario 64 and it’s more than overdue for a similar experience. Sadly, SM3DW doesn’t look like it can possibly be that game in terms of graphics, but that doesn’t take that much away from how cool it looks in general. 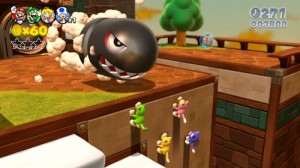 Blending the multiplayer action options of New Super Mario Bros. U with the 3D platform style of Super Mario Galaxy and Super Mario 3D Land, Mario’s debut Wii U 3D title is also the first multiplayer Mazza game ever. It’s a surprise that it’s taken so long for the big N to combine the two, but it looks like they’ve definitely got it right in terms of fast paced multiplayer fun.

It’s not to say that this doesn’t come with it’s disadvantages though. In order to create a game that can accommodate up to four players on one screen without splitting it, the game needs to sacrifice an element of scale in the process, so while you get to have your buddies along with you for support, you lose the possibility of epic proportion. This means smaller bosses to tackle and environments that have a little less scope for awe inspiring vistas.

It’s a sacrifice that the Nintendo team behind the game have made happily, and the game will inevitably be a whole lot of fun to play, but we can’t help but feel like we’ve had a lot of fun from Mario in recent years and it would be cool to get a little more awe built into the next game they develop.

Picking up the game for the first time you’ll be able to choose between Mario, Luigi, Princess Peach and Blue Toad (just to confirm, he’s just got a blue spotted head, he’s not got a serial Tourette’s problem) to take on any level you face. If you’re playing multiplayer, you’ll get to choose between the four to work together to complete the level.

Each of the four have slightly different attributes to take into account when making your selection. Mario is middle of the road in terms of jump height and speed, Luigi is a bit slower, but can jump higher and falls slower with his windmill legs of fury, Princess is the slowest of the lot of them, but she’s a strong jumper and floats with the aid of her pink frilly dress, and Toad is gas, but really struggles on the jumping front. In practical terms, what this means is that if a level has a chase element you might want to tag Toad in, but if it’s a sky terrain you’ll be safer with Peaches billowing bustles beneath you.

If you’re playing with the Wii U gamepad you’ll be able to rub the touch screen to reveal secret items as you progress. From the look of the trailer, we believe that you’ll be able to do something similar by pointing the Wii remote at the screen if you’ve got a few players in on the action.

The other cool addition to the gameplay is that you get to ride on the back of water dragons and, randomly, in an ice skating boot. Check it out in the trailer below. It looks like one of the game’s best features, in addition to the multiplayer fun and new move set. Speaking of which… 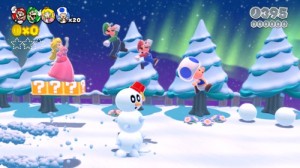 As well as established, old favourite abilities like flight with the Tanooki Suit, boomerang wanging with the Boomerang Suit, fire balls, Propeller Box and star invincibility, Mario and pals have got a number of new powers thanks to the slightly mental world of Sprixie. Here’s a quick run down of them:

Cat suit – Run into a shining Super Bell and you’ll don the cat suit, which is random in the extreme. With this on you can run up walls and poles with ease, scratch your enemies to oblivion, perform a jumping pounce move and pad through the levels a whole lot quicker on your feline paws.

Doppelganger – Collect a Double Cherry to create duplicates of yourself to dish out even more damage. Collect additional Double Cherries to double up even more. We’re not sure how far Nintendo have taken this in the game, but hopefully there’s at least a couple of levels where they’ve gone to the extreme in the name of doppelganger science.

Canon Box – This is pretty much what it says. A box that acts as a canon to fire what looks like red canon balls at your enemies to knock them out.

Pick up throw down – SM3DW brings a little of the magic of the classic Super Mario 2 throw fest to the Nintendo Wii U as you get to pick all sorts of items up and use them to wade through the onslaught of Bowser’s minions. It ranges from baseballs and snowballs to piranha plants and the more established Bob-ombs.

Super Mario 3D World looks a whole lot of fun, but it doesn’t quite instil us with the same amounts of reverential awe as Super Mario 64 did when it was released back in 1997. However, the more we watch the trailer, the more we get excited about getting to play it all the way through. It may not be what we had in mind for the first Mario 3D adventure on the Wii U, but it’s definitely going to be amazing.