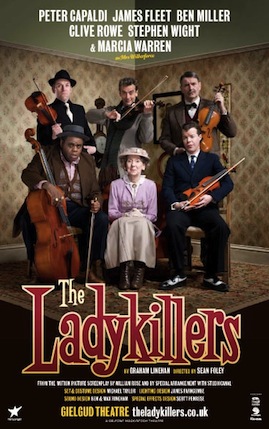 The Ladykillers was set for another roll of the dice at the Gielgud Theatre in winter 2011 bringing the adaptation of William Rose and Alexandre Mackendrik’s classic black comedy back to the West End. With what was the making of a perfect cast it was set to be a great adaptation in the making and one the year’s hit plays.

Starring Peter Capaldi (The Thick of It and Dr Who) as Professor Marcus, and featuring Ben Miller of Armstrong and Miller fame, along with and James Fleet (Four Wedding and a Funeral and The Vicar of Dibley), the Gielgud adaptation of The Ladykillers was widely regarded as a brilliant production. The Telegraph and The Guardian both gave it four out of five stars, while The Independent awarded it five out of five in its review back in December 2011.

The original film came out in 1955 starring Alec Guinness and Peter Sellers and it’s the same story for the Gielgud production some 56 years later. The plot revolves around a gang of robbers led by Professor Marcus who take up residence with Mrs. Louisa Wilberforce, a little old lady with a penchant for crying wolf. However, when their big job gets discovered by the blue rinse darling they are forced to go to extreme measures to keep things quiet.

The dark comedy was also remade recently directed by the Coen brothers and starring Tom Hanks, but it is the original with its Kings Cross setting that is the source of the Gielgud Theatre’s adaptation. The Ladykillers played at the theatre from the opening night on the 7th December 2011 through to its close on the 18th February 2012, with previews on the 28th November 2011.

The new adaptation of The Ladykillers has been written by Graham Linehan (Father Ted, The IT Crowd finale) and is directed by Sean Foley. Performance times were at 19:45 for Monday to Saturday shows and 15:00 on Wednesday and Saturday for the matinee.

The success of the 2011 run has led to a series of extensions for the production, switching cast members to keep things going. The most recent show opened on the 29th June 2013 and starred Simon “suits you sir” Day (The Fast Show), Ralf Little (The Royle Family), Con O’Neill and John Gordon Sinclair, Chris McCalphy, and the legendary Angela Thorne (To The Manor Born) as the lady of the show, Mrs Wilberforce.