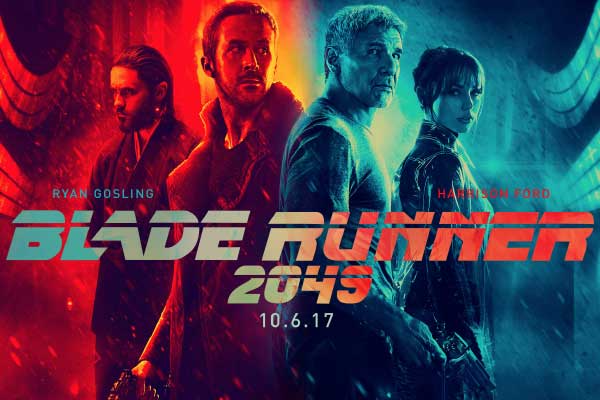 Few films will arrive this year with quite as much hype and weighty expectation than Blade Runner 2049, and while it delivers one of the most vividly crafted realities you’re likely to see on the big screen, it doesn’t have the same strength in the storyline. It’s still well worth going to see – the quality of the cinematography, lighting, special effects and sound are more than enough to make the trip worth while – but you shouldn’t go hoping for a miracle, because it just isn’t there.

There are, however, a lot of positives, including some big performances from the cast, who do well to build out the “more human than human” motif that sits behind it all. Ryan Gosling is the linchpin for this and he rarely puts a foot wrong as LAPD Blade Runner K.

He’s got a great supporting cast to help him out with impeccable delivery and character development from Ana de Armas (War Dogs), Sylvia Hoeks and Robin Wright (Wonder Woman). Harrison Ford (Star Wars: The Force Awakens) is pretty strong too and while he’s kind of left dangling for a little while, there’s more than enough to make this a good return for him in the role that he made so famous back in the early 80s.

Perhaps the best performance, though, comes from Jared Leto, who manages to reprieve himself as the antagonist of the piece, following the woeful reboot of The Joker in Suicide Squad. He’s genuinely sinister whenever he’s on the screen with a cold and creepy delivery that has a lot of impact.

However, the story doesn’t quite live up to expectations. Not only is it too bogged down in the past, but it’s also got more twists and turns than a M. Night Shyamalan film. Its 1982 predecessor worked so well because of it’s elegant simplicity and singular purpose, but Blade Runner 2049 throws up a lot of intricacy and, sadly, it doesn’t all stick.

Then there’s the biblical “child” side of the story, which feels a little old hat to fit within what is otherwise a polished and futuristic concept. It’s just one example of the breakdown of logical flow in the film, which stretches into the technological side of the vision of the future. There are a number of holes in the thinking behind certain elements, whether it’s the idea of creating a robot that can be drowned or the head mash of cybernetic zygotes.

If that isn’t enough to pick at, there’s also the Ghost In The Shell memory fragments that feel too close to the clone to fit into the film. Everything doesn’t need to be quite so super-connected to work, but unfortunately there’s often an attempt on the part of story writers to try to string things up in a nice bow. That doesn’t always pan out and it doesn’t work very well here. It’s tough to criticise Hampton Fancher’s story, but it’s by far the biggest stumbling block to our review score.

Fortunately, there’s more than enough to distract you along the way with Roger Deakins’ stunning cinematography, which is a sight to behold on the big screen. He’s got a masterful command of every shot and they’re all designed to support the overall look of a broken future.

It’s not just the filming that impresses, though, as there’s just as much perfection in the set construction, lighting, costume, and special effects. It also punches hard with a powerful and awe-inspiring film score from Hans Zimmer and Benjamin Wallfisch.

Overall, Denis Villeneuve’s Blade Runner 2049 is near perfect in parts, with the visual style and music to stand up to the weight of expectation from fans of the 1982 original. However, the plot doesn’t hold enough of a steady line to be able to say the same, despite some well-delivered acting from the cast. If we were reviewing the film for the story alone, it would be difficult to give it much more than 3.5/5, but with the five star-worthy cinematography and sound the film deserves a higher score. Just keep your expectations in check before you go to see it yourself.