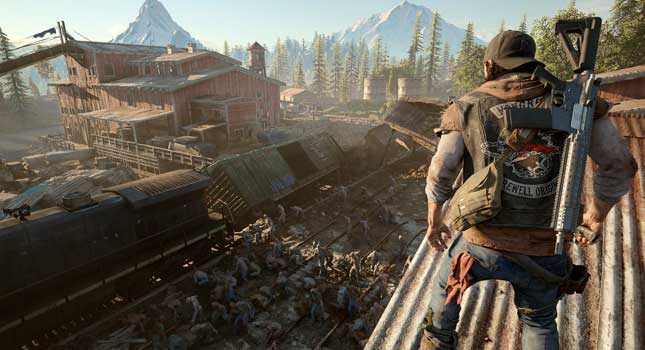 Sony’s E3 2016 conference closed out with the reveal of their new IP, Days Gone, and while there hasn’t been a great deal in terms of new information on the game since then, the upcoming arrival of the 2017 show in June should see that changing. It originally debuted through an announcement trailer earlier in the show, but it was the arrival of the intense gameplay demo which got the public buzzing. You can check out the gameplay action for yourself below.

Days Gone is a mixture of popular genres, being an open world action adventure survival horror game which was displayed through the demo. It’s been developed by the Sony owned Bend Studio, known for the PS1 classic, Syphon Filter. There are immediate comparisons to be made with The Last of Us and The Walking Dead, with an unfortunate hint of Ride to Hell with the inclusion of a motorbike also. This isn’t a bad thing however, as there is a lot of discussion about the possibility of this being the next big PlayStation franchise.

There is currently no UK release date for Days Gone, although rumours claim that it could be released later this year. Some sort of release date may well be announced at E3 next month. We do know that the game will support PS4 Pro upon release, with it also being an obvious PS4 exclusive as it is Sony’s own IP.

The survival horror is set two years after a global pandemic which has wiped out almost the entirety of humanity, a setting which will sound familiar to gamers. These former humans are now zombie-like infected creatures called ‘Freakers’, which roam and hide around the open world waiting to strike.

Players will control Deacon St. John, who refers to himself as a drifter and bounty hunter. From what we know, he’s a tough guy who has lost a lot in his life because of this pandemic. He chooses to live his life dangerously on the road instead of simply residing in a wilderness encampment, which he believes are unsafe anyway.

As of writing, it’s unclear as to what the actual narrative of Days Gone will be besides the setting and some background of the main protagonist. Hopefully E3 will provide us with much needed details.

The open world thriller is powered by the trusty Unreal Engine 4, helping to display a widely detailed wilderness. Throughout the landscape are dull, worn down environments, conventional of other post-pandemic games such as The Last of Us.

It’s good to note that the power of the PS4 is utilised through the hundreds of Freakers that can appear on screen at the same time, with no drop in framerate either. It’s unknown what the limit is, but each Freaker appears to be well detailed with their rotten, unattractive appearance. Admittedly, Days Gone currently doesn’t look as graphically special as other open worlds like the recent Horizon Zero Dawn, but it is still very impressive.

Despite the narrative of the game being kept quiet, we know that the gameplay will consist of players being given objectives to complete. These can be completed in multiple ways thanks to the sandbox environment. Players can freely choose to either take the stealthy approach or go down the aggressive route. Again, similarities can be drawn to various survival horrors but it is always a neat feature to have.

Players will encounter different types of Freakers as they progress through their battle for survival. Two versions have been confirmed, Newts and Hordes. Newts are young Freakers who crawl around areas, hiding in wait before jumping on their prey. Hordes are self-explanatory, but here they are unlike anything ever seen before, with the possible exception of Zombii U. As previously mentioned, hundreds of Freakers can show up on screen at once and that’s put to use here. In the gameplay preview, they appeared easy to kill but their quickness and the mass of Hordes is enough to strike fear into players. Also, the game features a day-night cycle which affects the behaviour of these enemies, so expect them to be quicker and more aggressive at night.

There is still hope for Deacon St. John’s life, as players have guns and items at their deposal to defend themselves. There’s the ability to craft items such as explosives, which can be attached to certain surroundings such as a pile of logs. Vehicles are available to travel and explore the wilderness around St. John, with motorbikes thankfully seeming to have good control. Combat plays a major part when encountering lone infected, with the violence and environment interaction creating further comparisons with The Last of Us.

The lucky developer in control of the gameplay demo had plenty of ammo and useful items in his possession, but it’s probably safe to say that resources will be hard to find in the final product. Running out of ammo while on the run from a Horde sounds like some sort of sick nightmare. The gameplay does look very promising overall, but it would be nice to see more variety before the game’s release. There’s only so many horde chases gamers can enjoy before it gets tiresome.

It’s fair to say that Days Gone does share similarities with many different games featuring infected enemies, but it’s aiming to combine all of these elements into one exciting package. It certainly looks like it’ll provide fans of multiple genres with much intensity and delight.

Limited information on the anticipated game has been provided since E3 last year but here’s hoping that next month’s event will change that. A story trailer would be much appreciated, along with more of the different types of gameplay action we’ll get to experience. Whatever is shown, it will be covered right here on Tuppence.