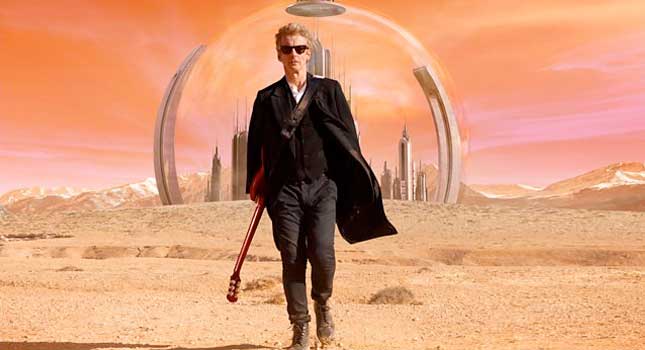 The season finale for Doctor Who Series 9 didn’t disappoint whatsoever, delivering building excitement, fan favourite treats and some very cool new developments. Episode 12: Hell Bent saw the Doctor finally facing the originators of his kidnapping, which led to the death of Clara in Face The Raven and his four billion year incarceration in Heaven Sent, so as you can imagine it’s dramatic and momentous in the extreme with more than a few intense scenes to take in.

It’s up to its neck in emotion as the Doctor has already proven the extremes he’s willing to go through for his companion and it only gets more pronounced in Hell Bent, which starts out as an act of revenge, but turns into so much more. The evolution of the final three episodes of Series 9 has been some of the best TV of the year and for sci-fi addicts like us a must-watch to see the Doctor wrestling with some of the toughest situations he’s faced since Peter Capaldi took over as the 12th Doctor.

Having escaped from the confines of his own confession tablet and resisted the easy route out by not letting on about what he knows about the Hybrid, a mythical creature forged from two warring races, he finds himself on familiar soil with a plan that will take him to the very edge of the universe. It’s full of gravitas, which is helped along by some of the best CGI, set design and costumes we’ve seen from the show and fans of the show will be wrapped in wonder from the plot reveal start to climactic end of the episode.

Peter Capaldi and Jenna Coleman are scintillating to watch as their on-screen chemistry reaches its emotional peek. Saying goodbye was never going to be easy for fans, but seemingly having to do it twice will have led to a fair few lumps in throats. If there was many dry eyes during some of the final scenes we’ll be very surprised, because it’s thick and raw with emotion, vindicating the less animated response from the Doctor in Face The Raven when he appeared to have accepted Clara’s fate.

The scenes in the diner are heart rending to watch as it dawns on you what is actually going on. The Doctor’s guitar riff, which sounded like a play on Leonard Coen’s Joan Of Arc, ratchets up the sadness of the scenes once you understand the switch that you’re seeing, but it’s Jenna Coleman’s commanding compassion and sacrifice that makes it all so palpable, catching you off guard as the episode segues from action to quiet revelation.

Maisie Williams is as strong as she’s been all series, giving her character a lot of impact on the development of the overarching story. There are a number of episodes from Series 9 that we’d happily watch again and the ones that she’s featured in are high up on the list. Hell Bent is definitely number one and with such an exciting end it leaves a lot of question about the future direction of the show and the potential for a new spin-off series.

It also puts even more emphasis on the possibilities of the 2015 Christmas Special, which will see River Song back in the mix, her first outing with Capaldi’s Doctor. The trailer for the episode makes it look a lot of fun, with both Greg Davies and Matt Lucas set to co-star, which is probably what we all need after such an emotionally charged series.

Hell Bent is the perfect final episode for Series 9, confirming the show at the height of British family entertainment, and our review score reflects the impressive direction the series has taken, pulling it all together with a genius finisher. We’re not always complimentary of Stephen Moffat, but when he’s on top form he really shines, and that’s definitely the case here for the writer of the episode, and lead writer for the show. It’s also another well directed outing for Rachel Talalay, and we’ll be very surprised if we don’t see the two of them working together again in the not too distant future.

Share our review of Doctor Who Series 9, Episode 12: Hell Bent with: