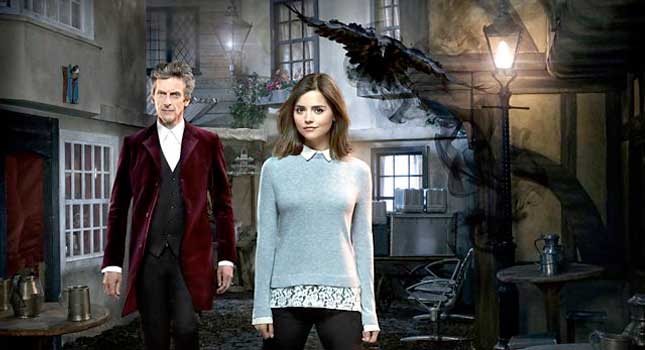 Doctor Who Series 9 reached both its height of excellence and its lowest point this week in Episode 10: Face The Raven, written by Sarah Dollard. If you haven’t seen the episode yet, you should probably watch is before reading any more, because it’s impossible to talk about it without giving away any spoilers. It’s also one of the most important episodes of the series, making it a must watch for anyone with even a passing interest in Doctor Who.

It starts out with a brilliant mystery that sees The Doctor and Clara scouring the streets of London, both on foot and from the comfort of the TARDIS in flight mode above the city. They’re trying to find the truth behind a sinister countdown that has appeared as a tattoo on the back of Rigsy’s neck, who phones the TARDIS when he notices the weird marks and can’t remember what happened to him the day before.

When they eventually get to bottom of it all they find themselves mixed up in another intricate web spun by the immortal, Ashildr, who had sentenced Rigsy to death for the murder of a woman within her refugee sanctuary. It’s a finely crafted story that keeps you hooked right the way through, building up to its devastating culmination and leaving you with no doubt that there was no reprieve this time.

Series 9 has been jostling the notion that it had become common knowledge that Clara would be getting written out of the show at some point during its twelve episode stint, and every episode saw her coming close to biting the dust. However, in Face The Raven it takes on the challenge of giving Gemma Coleman a fitting end with little uncertainty that the raven would signal her final adventure with the Doctor.

It was always going to be sad saying goodbye to such a significant part of the show for the last few series and that’s definitely the case here. The dialogue and tension is wound to perfection, pulling at your heartstrings as Clara and the good man say their final goodbyes. Jenna Coleman is on exceptional form, as she’s been throughout Series 9, and she delivers some very moving lines, confirming her place in the history of the show.

Peter Capaldi also does a very good job of giving Clara the sendoff she deserves, looking as sad as we’ve ever seen him when the reality of the situation hits home. His part is added to by an equally credible performance from Maisie Williams as the scheming Ashildr, whose duplicity is undone by Clara’s intended cunning, which seals both their fates. We’re clearly going to see more of the former Game Of Thrones star and with the Doctor’s newfound anger at her intervention it should be even more of a tumultuous relationship from now on.

It was good to see Rigsy back in action and Joivan Wade does a very good job of bringing a fitting level of gravitas to the episode. He’s well poised and natural in the role and we’ll be surprised if he isn’t an early contender for the next companion for the Doctor.

The reference to Edgar Allen Poe’s narrative poem The Raven also acts to bring more weight and deathly intent to the episode and the presentation of it as a spectral raven is genius. Both Sarah Dollard and director Justin Molotnikov should get a lot of praise for crafting such a special episode to see off the impossible girl.

Face The Raven is a truly brilliant episode and the remaining two stories in the series, along with the Christmas Special, will have their work cut out for them to live up to the high marker it has set down. While Series 9 has had its ups and downs, Episode 10 does a lot to confirm it as a classic series in the making, and we’re impressed that they managed to create such tension about the end of Clara, despite the fact that it had become common knowledge that she was leaving the show. It also sets things up for one hell of a finale to the series as the Doctor must face the people behind Ashildr’s deception.

Share our review of Doctor Who Series 9, Episode 10: Face The Raven with: