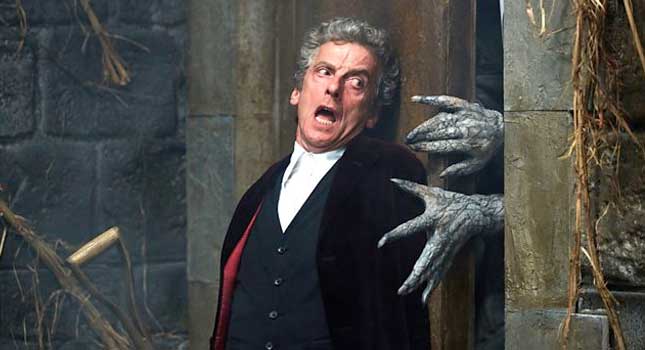 Following up on last week’s epic episode, Face The Raven, was never going to be easy, especially when there’s just a main cast of two to speak of, but Episode 11: Heaven Sent is as dark and morose as you might expect for the first entry following the death of Clara Oswald. While it’s not faultless, it does manage to delve deeper into the psyche of the the Doctor, as well as dishing up a few frights along the way.

We’re not used to seeing the great Time Lord in a state of fear, but that’s the premise that sits behind the story, picking up with him upon arrival through the teleporter he was tricked into taking by Ashildr. He finds himself trapped in his own nightmare being slowly pursued by a sinister, cowled beast that stalks him relentlessly. Somehow, in and among all of the sparsity of the situation, there’s a whole lot to keep you hooked to the mystery of it as the Doctor tries to work out what dimension of hell he’s been sent to, or more importantly what’s behind the despicable plot that has already taken the life of his much-loved companion.

It’s dark and fantastical with shades of the great noire writers of the past, taking in elements of everything from Dickens’ A Christmas Carol to Bram Stoker’s Dracula and Mary Shelley’s Frankenstein, continuing on from the Edgar Allen Poe of Episode 10. It blends this with the usual sci-fi construct in a way that feels like it has managed to tap into some of the genius that made Dark City such a stand-out film. It’s only a fleeting element of the episode, but it’s just enough to remind you that you’re watching Who and not some viciously twisted reboot of Nightmare.

It’s brilliantly creepy, not just because of the slow edge of the veiled creature tracking him inside the twisting island castle he’s been trapped in. The presence of death and hollow skulls is a palpable visual feature in the film, and her former time and space traveling amigo’s apparent madness implies a little inspiration from Shakespeare’s Hamlet. However, it’s the shade of Clara with her back to the Doctor that really tingles the spine, looking a bit like the end scene of The Blair Witch Project.

In Heaven Sent the series continues its fever pitch momentum towards next week’s season finale, which by the look of the teaser trailer could be every bit as good as it needs to be to outdo Clara’s death as the final passage. Some of Peter Capaldi’s lines are a little clunky around the edges, especially in the first few minutes of the episode, but he manages to pull things around by the exciting end.

On the whole this is another solid episode from writer Steven Moffat, which makes up for his lesser efforts in the opening two episodes, The Magician’s Apprentice and The Witch’s Familiar. Director Rachel Talalay has done a very good job of stringing it all together, helped along with some great styling from the set designers.

Share our review of Doctor Who Series 9, Episode 11: Heaven Sent with: