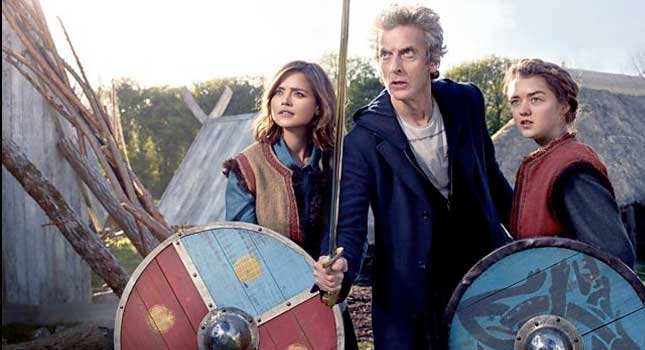 Peter Capaldi and Jenna Coleman are well and truly up to speed again in Doctor Who Series 9, and with the sheer fun and portentous finale of Episode 5: The Girl Who Died, they’ve only added to the brilliance of the series. This time around they find themselves in the company of Maisie Williams off of Game Of Thrones, playing a valiant Viking girl, and she makes a welcome addition to the storyline, causing more than a few ripples in the space-time continuum before the episode is done.

The Girl Who Died aired on BBC 1 on Saturday the 17th October 2015 and will be available on iPlayer for the customary thirty days if you still need to catch up on Who. It’s a classic Doctor finds himself in a period in history only to find that he isn’t the only advanced alien in town kind of story and it does it all very well with just enough tongue in cheek comedy and serious intent to make is great entertainment. It’s got some similarities to Series 8‘s Robots Of Sherwood, but with a bit more lasting impact.

The Doctor and Clara start the episode in a whole lot of trouble, throwing us right into the action before the credits have even run, which is always a good sign. When the Doctor gets his act together just in the nick of time to save his TARDIS companion, who’d been stranded in outer space with a killer spider crawling around in her space suit, they teleport back in time and land themselves in even more bother at the hands of a Viking village and their God overlord, Odin.

Starting an episode at the end of an untold adventure always makes for a good intro to a story as it feels like they go out of the frying pan and into the fire week after week, which is sort of what it feels like throughout the majority of the many generations of Doctor Who. Just when they think they’re out of the woods they manage to find another darkly forested situation to get embroiled in and this time around it’s a band of marauding Vikings, their merciless godling impostor and a brave Viking girl that are in the thick of it with them.

There’s a good amount of comedy to the episode, ranging from the hilarious vision of Ofin’s face in the sky and some great quips from the doctor to the dim-witted comic style of Tom Stourton who plays a Viking blacksmith whom the Doctor names Lofty. It makes it a fun and light-weight adventure for the most part, but just when you think it’s all just a jaunty jape in the past it suddenly gets a wee bitty serious on you, giving it much more gravitas and series impact than you’d bargained for.

The Doctor has been getting pretty serious for a while now, in particular with his concern for Clara’s well being and it’s beginning to feel a bit too much like a warning than well meaning care. The Girl Who Died only adds to this sense of rising foreboding and the more serious, mortality-framed ending acts as a significant reminder of Clara’s relative frailty, despite her evident action adventure skills. The fact that we also know that Jenna Coleman will be calling it a day on Doctor Who some time during Series 9 only adds to the tension every time she finds herself in a pickle.

In Episode 5, she and Capaldi are just as faultless as they both were in Under The Lake and Before The Flood. This is a very different kind of two part story, so they get to tap into a wider range of skills with more emphasis on comedy, while still retaining the nail-biting spirit that they instil in you while you watch. Maisie Williams makes for a good addition too, but it kind of looks from the end of the episode and the teaser trailer for the next that she might just be getting started on her Doctor Who adventure.

The big test for any outing for the BBC sci-if series is how much it makes you look forward to the next episode and The Girl Who Died leaves your anticipation on overdrive.

< Episode 4 – Before The Flood review

> Episode 6 – The Woman Who Lived review

Share our review of Doctor Who Series 9, Episode 5: The Girl Who Died with: