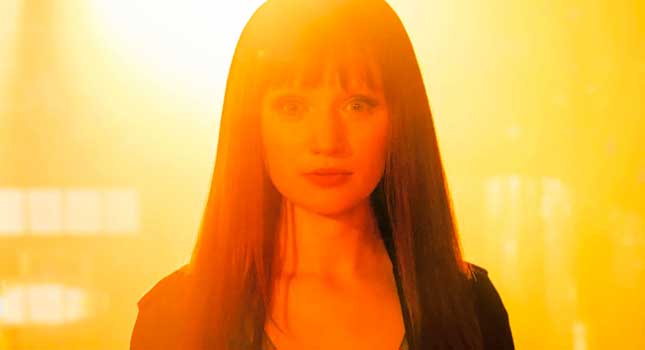 Episode 1 of Humans Series 2 arrived tonight and while it wasn’t as gripping as the climactic finale few episodes of the opening series, it does set things up well for a dramatic new direction for the story. It’s sort of inevitable for things to be a little slow to begin with, as it lays the foundations for the coming episodes, but there’s more than enough intrigue to set things off in the right direction.

The story works very well as a continuation of show, building on the discovery of the consciousness code and taking it to the next level. Niska gets the centre stage to begin with as she roams free with the code, but when it gets released randomly it sets in place the series of events that change everything once again.

It’s a bold start and for the most part it’s well delivered with new conscious synths struggling to come to terms with their newfound emotional complexities. We also got to catch up with the rest of the characters from the opening series as Joe and Laura attempt to rebuild their family and Mia, Leo and Matt attempt to mop up the fallout from Niska’s actions.

It does well to keep the powers-that-be fairly shadowy throughout the opening episode, which creates a lot of questions about who’s controlling the seemingly all-knowing force.

Things jump around quite a lot, both in terms of geography and story arc, which is a little fragmentary at times. Hopefully, the rest of the series can draw everything together to create a little more unity before the final episode airs.

The cast were a big part of the success of the 2015 breakout hit and they’re back as strong as ever in Series 2. Gemma Chan, Colin Morgan, Emily Burlington and Ivanno Jeremiah have grown well into their roles as the conscious synths, Mia, Leo, Niska and Max, and Katherine Parkinson and Tom Goodman-Hill bring the suburban stability to make the show at least vaguely believable.

The new additions haven’t really had enough time to flex their character muscles, but Carrie-Anne Moss shows a lot of potential as Dr. Athena Morrow. Equally, Sonya Cassidy came across well as one of the recently humanised synths joining Leo’s band of runaways.

However, it’s not all sci-fi perfection as a number of elements don’t sit too well, leaving a few doubts over what’s to come from the rest of Series 2. The biggest is the sheer convenience of some of the things that happen, which look way too contrived to feel plausible. When you combine that with the slightly clumsy way it introduces more challenging topics like the loss of jobs to mechanisation, you’re left with just a little too much forced intent.

While it doesn’t always throw them up all that well, Humans Series 2 does highlight a lot of big issues, which it tries to deal with as credibly as it can within the short confines of the show. Their presence is an important ingredient in delivering impact and there’s just as much depth as there was with the opening series, covering relationships, the nature of humanity, freedom and the role of ever improving technology on society.

The second outing for the sci-fi drama may not be perfect, but it has a great style, strong cast, a clever overarching plot and it attempts to tackle some increasingly important themes. It’s just a shame there wasn’t quite enough fine-tuned scrutiny to it all to make it the work of excellence we were hoping for. There’s still the rest of the series to go, so maybe the negatives will be smoothed out in the long no run, and with Humans Series 3 recently confirmed there’s plenty left in the development of the characters.