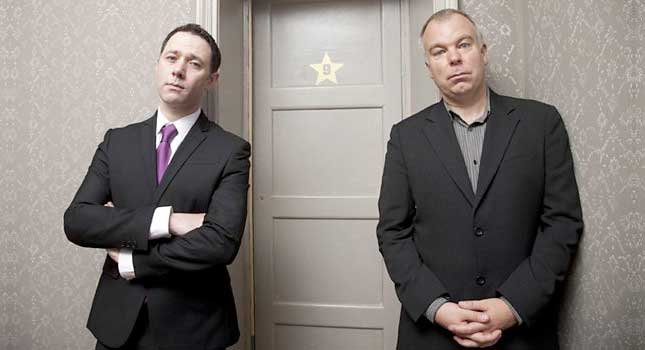 The BBC has confirmed that it will be picking up a third series of the dark comedy, Inside No.9, bringing us yet more twisted tales of fancy from the brilliantly warped synapses of Reece Shearsmith and Simon Pemberton. With the success of the two previous outings for the tangential series, and the shear brilliance of bot The League Of Gentlemen and Psychoville, we’re expecting more great things from the two comedy writers and actors.

It will continue the anthology concept that has guided the first two series with each new episode a tightly contained and unrelated nugget, like the TV series equivalent of the non sequiter. Each will have a stand-alone story set in a different time and place, with a variety of styles, tone and general dialog milieu each week. Though we’re not 100% sure why we’re using such terminology today, it does feel somehow fitting, so just go with it, or else fluff off.

As before, so shall there be again a variety of different genres covered in the course of Series 3, ranging from horror, thriller noir, comedy drama and drama most foul, or something much akin to that, maybe with a few other additions. The only thing that links them all is the number 9, which finds its way into the dark heart of each episode like a super-vixen Valkyrie tempting you to your doom only to carry you on slender, winged shoulders to the fallow fields of Valhalla. This could be anything from the carriage of a train, number of a house or the amount of marshmallows Shearsmith has got to eat in an episode.

The official air date hasn’t been confirmed as of yet, which was a similar case with Inside No. 9 Series 2, which most people, including us, didn’t have a clue was on the way until it started getting mentioned with just a week to go. Luckily, we’re here to make some educated guesses based on the facts to hand. Firstly, 2015 is pretty much at an end and the announcement from the BBC about the upcoming third series doesn’t include anything on the guest cast list, so we can safely say that it’ll be 2016 before it hits the tracks. Secondly, the last series began to air from the 26th March 2016, so it follows, like angel into delight, that it will probably be around the same time of year for the next set of 9s.

Though one or both of the writers star in each of the stories, the rest of the cast is different every time, which leaves almost as much scope for guest appearances as the modern day Dr Who. The last two series has seen Gemma Arterton, Denis Lawson, Alison Steadman, Tamsin Greig, Jane Horrocks and Jack Whitehall getting in on the neufology (that’s nine in French cleverly combined with the word anthology), so it’s going to be fun getting to see who the gruesome twosome have got in store for us this time.

Simon Pemberton and Reece Shearsmith have also confirmed that there will be a further 6 episodes to look forward to in Inside No. 9 Series 3, and that each one will have the same high ambitions that has helped to lift the previous two rounds out of the bread basket. Commenting on the impending third season, they said (as a singular unit), that, “Every story is a labour of love, so we will do our best to ensure the viewers are once again moved to tears of laughter and terror. (If you can get tears of terror.)” Bless ’em.