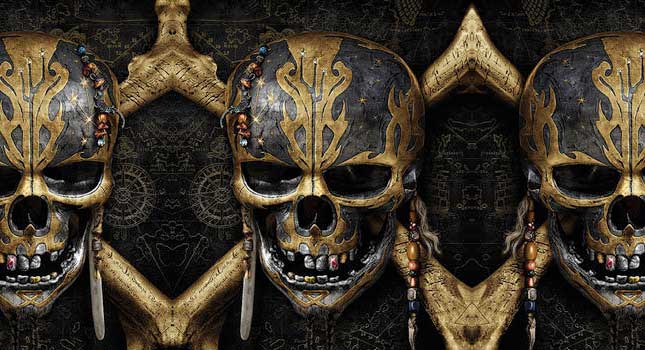 Captain Jack Sparrow returned for action again in 2017 with the release of Disney’s 5th film in the series, Pirates Of The Caribbean: Salazar’s Revenge, or Dead Men Tell No Tales as it’s known in the US. With Johnny Depp (Black Mass) in the lead role once again and the addition of Javier Bardem (Skyfall) as his new sea dog nemesis, a ghost pirate called Captain Salazar, it’s another big budget adventure from the dark swashbuckling Disney series¹.

It follows on from the grim adventure of On Stranger Tides, the fourth film in the massive franchise, which saw Jack hunting down the fountain of youth and tackling Blackbeard along the way². This time, the treasure he’s after is the Trident of Poseidon, but more as a weapon against the onslaught of Salazar than as a new adornment to add to his costume. Check out the teaser trailer below to see what to expect for yourself and you can read our full review for more details, including the post credits scene that features.

Pirates Of The Caribbean: Salazar’s Revenge had a UK release date on Friday the 26th May 20173, which is also the date it arrived in the US1. It was screened in 2D, 3D and IMAX, and with so much emphasis on great visuals and action it was one to see in as many dimensions as possible. It hit the big screen in the UK on the same weekend as Diary Of A Wimpy Kid: The Long Haul, so it had a pretty clear route to the top of the box office.

The film had a UK DVD release date on the 2nd October 2017 and it’ll also be available on Blu-ray, Blu-ray 3D, digital and digital rental on the same date.

The plot of the film sees a luckless Captain Jack in the cross-hairs of the dread ghost pirate, Captain Salazar, who has escaped from the Devil’s Triangle. The old enemy of Jack immediately sets about carrying out his plan to kill every pirate out at sea, so Jack must hunt down the trident of Poseidon, which has the power to control the seas, in a bid to stop Salazar and ultimately save his own rummy skin².

• Watch the full Pirates Of The Caribbean: Salazar’s Revenge trailers >

Johnny Depp returns as Captain Jack Sparrow and Disney has also announced that he’ll be joined once again by Orlando Bloom (The Hobbit: The Battle Of The Five Armies) as William “Will” Turner / Davy Jones, who hasn’t featured in the series since the third movie, At World’s End back in 2007. They’ll both have to face down Javier Bardem as Captain Salazar and somewhere in the mix will be a cameo from Paul McCartney4, who follows in the footsteps of Rolling Stones guitarist Kieth Richards.

The cast also includes Geoffrey Rush (Minions)1 as Captain Barbossa, Kaya Scodelario (Skins) as Carina Smyth, a scholar and academic who has set out to find the trident to help her campaign to allow women to go to university5; Brenton Thwaites as Henry Turner, Kevin McNally (Legend) as Joshamee Gibbs and Stephen Graham (This Is England ’90) as Scrum1.

The film has been given an age rating of 12A in the UK by the BBFC with “moderate fantasy action violence”.

The initial details for the Walt Disney Pictures production were announced at its D23 2015 expo with the directorial team of Joachim Rønning and Espen Sandberg (Kon-Tiki) confirmed to take on the film1. Jerry Bruckheimer will be the producer once again, having held the role throughout the entire series of Pirates Of The Caribbean, and the script has been written by Jeff Nathanson, who makes his debut for the series. Filming has taken place in Australia, with producer, Bruckheimer, releasing a number of cast pics from behind the scenes on his Twitter page. Check out some of the best below: 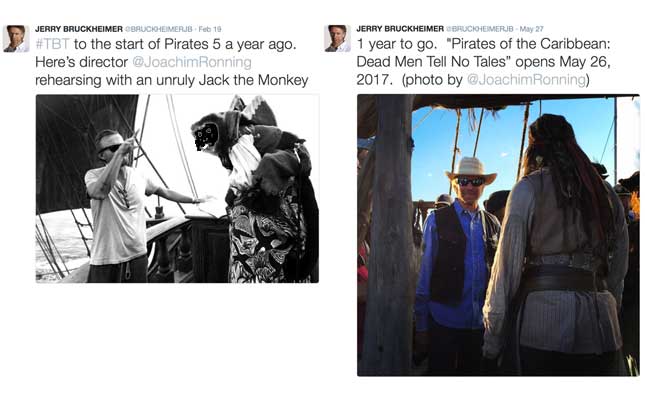 Pirates Of The Caribbean: Salazar’s Revenge is one of the big box office releases of 2017 and we’ll be very surprised if it doesn’t take the #1 spot for a good portion of the summer. With the high adventure, dark style and good humour of the film, the 5th installment may not be the treasure-filled movie we were hoping for, but it’s entertaining enough.

Bringing in Javier Bardem works well to add to the excitement and dark menace. We weren’t as impressed with his role in Skyfall as the rest of the world, but in Pirates Of The Caribbean 5 he delivers a brilliant matador del mar as Captain Salazar. You can see him briefly in the teaser trailer above, but his role is far more involved.

Read our full review at www.tuppencemagazine.co.uk/pirates-of-the-caribbean-5-salazars-revenge-review-end-credits-scene/, before you pick it up on DVD or Blu-ray.