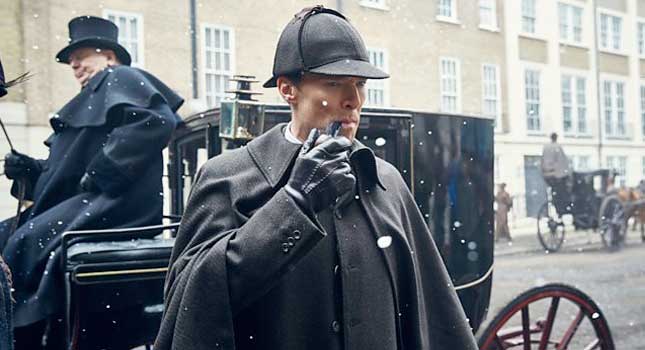 If you’re a fan of the series and you haven’t seen the special episode, Sherlock The Abominable Bride, then you should probably watch it before reading on, because there’s no way to talk about it in any detail without discussing a few spoilers. It’s a time-warped, back spin to the Victorian era and it comes together with a lot of charm with a clever hook to the modern era Holmes stories that we’ve all come to know and love.

Playfully challenging and with a twisted sense of humour that’s got Mark Gatiss’ name written all over it in fat and punched type, the episode manages to stir and delight in equal measure with its tale of retribution past. There’s murder, mystery and mysticism wrapped up in its labyrinthine confines and it’s all so devilishly intriguing until, as ever, the reality of the situation is laid out bare. While the truth of the past falls a little flat with juxtaposed symbolism, unfair parallels and unnecessary embellishments, the thrill of the chase is enough to make it worth the effort, especially with the mind games link it has to the present day Sherlock and his troubles with Moriarty.

It’s entirely unabashed in attempting to deal with the less savoury realities of the original setting of the Sherlock Holmes stories or the complexities of the character that Sir Arthur Conan Doyle created back in the late 1800s. It was, after all, a society in which women were treated as second rate citizens without the right to vote and where drug use was fairly common place. These are both key points of the story as Sherlock The Abominable Bride tackles them head on, playing around with the role of men and women in society and making more than a few pointed references to Sherlock’s “use” of cocaine and morphine.

The episode is equally playful with what is real and what is the product of Holmes’ mind palace as he wrestles with the supposed reappearance of Moriarty in the modern day by remunerating a mystery from the annals of time and intersecting it with his own loci of elementary deduction. By re-imagining himself and everyone he knows in the thick of the unsolved case of the Abominable Bride – which features a ghoulish wife who kills herself only to return from the grave to inflict her retribution on the world – he’s able to make sense of the present. It makes for an ingenious plot devise, but when you also take into account the flashing pace of the episode and its many twists and turns, you end up with a decent flush to the four.

Benedict Cumberbatch (Black Mass) is the living embodiment of Sherlock Holmes and he’s as strong as ever in the 90-minute special. It’s a similar case for Martin Freeman (The Hobbit: The Battle Of The Five Armies), who has an incredible ability to morph into a role completely and he does it again with a slightly more Victorian Watson than we’re used to. There’s also a jumpy stand-out performance from Andrew Scott (SPECTRE) as Moriarty, although the amount of comedy attributed to the final fling of his last scene takes the edge off it all a bit too keenly.

The historic setting is on the romanticised side of the rose tinted glasses spectrum and doesn’t really show it warts and all, but it does look nice as Holmes and Watson charge around London on the trail of the bride killer. On the whole it works well taking things back to the past and it’s tied together with a lot of skill to weave it all in to the modern day Sherlock in a way that makes sense without feeling stretched. It all adds to the expectations for Series 4, but with more than a year to go until its air date, you’ll have to content yourself with re-watching The Abominable Bride to see what you missed the first time around.

Share our review of Sherlock The Abominable Bride with: