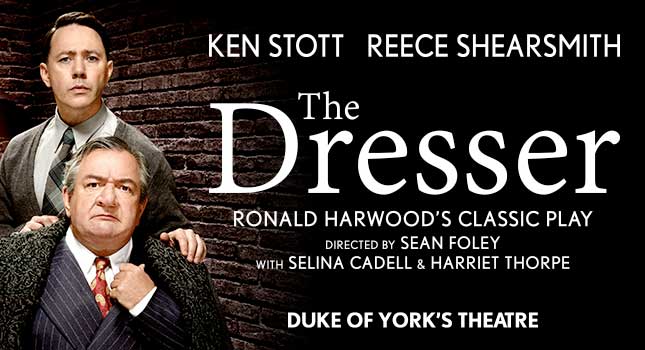 Reece “Not Now Silent Singer” Shearmith (Inside No. 9) will be taking to the boards with Ken Stott (BBC War & Peace) at the Duke Of York’s Theatre later this year in a new production of Sir Ronald Harwood’s The Dresser. With the recent success of the BBC adaptation of the play, starring Ian McKellen and Anthony Hopkins, it’s had a pretty significant comeback and the new production should prove to be a very different beast on stage with two very different actors in the lead roles.

The production is set to open at the Duke of York’s Theatre on Wednesday the 12th October 2016, following previews from the 5th October, and it’s set to run right the way into the New Year before it closes on the 14th January 2017. The show will be on Monday to Saturday with evening performances at 7:30pm and matinees most Wednesday and Friday at 2:30pm.

Tickets range from £31 for the cheaper of the Upper Circle seats to £103 for the more expensive Stall seats.

The plot for the play focuses on the almost symbiotic relationship between aging actor-manager Sir (Stott) and his trusty and dedicated dresser, Norman (Shearsmith), who has been by his side for the last sixteen years. With Sir’s faculties fading fast with sanity and alcohol acting as joint sledgehammers on his ability to perform, it’s as ever down to Norman to track him down, sober him up and dress him down for his part on the stage.

Though the country is gripped by war, Sir’s 227th performance of Shakespeare’s King Lear must keep the thespian light burning. With bombs raining down on Britain there’s a different kind of chaos reigning supreme for this ramshackle production of one of The Bard’s great tragedies, combining comedy and drama in equal measure.

Joining Stott and Shearmith in the 2016 revival will be Selina Cadell (The Lady Vanishes) and Harriet Thorpe, who you might recognise as receptionist, Carole Parkinson, from The Brittas Empire

The show is being directed by Sean Foley, who won Olivier Awards for Best Entertainment in 1999 for Do You Come Here Often and Best Comedy in 2002 for The Play What I Wrote. He also picked up two nominations for 2012 Best Director and Best New Play in 2012 for The Ladykillers, so we’ll be very surprised if he doesn’t go on to do something similar with his latest play.

The Dresser is a great comic-drama with elements that skirt very close to being tragic, running parallel to the playwright behind the play within the play. The casting of such captivating actors with incredible presence means that it will be an excellent run of theatre at the Duke of York’s this winter. It’s an unexpected selection, but one that could help the show stand out from previous, big-name performances of the play to put its own mark on the adaptation.

Share the details for The Dresser at The Duke of York’s Theatre with: