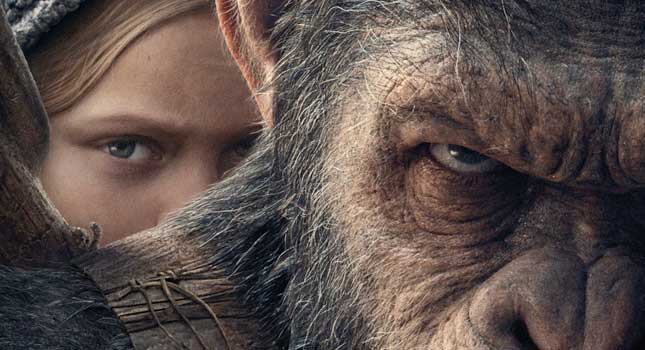 The saga continues and if anything it looks like the monkey are going to take it with the release of War For The Planet Of The Apes. Having been given super intelligence and greatly reducing the population of mankind in the opening movie, before building a new civilization in the sequel, it’s time for Caesar and his band of furry brothers to take the fight to humanity in all out war in the final third of the remake trilogy.

Andy Serkis reprises his role as the leader of ape kind, Caesar, and he has Matt Reeves back in the directors chair, following his introduction for Dawn Of The Planet Of The Apes. The Cloverfield director has built up a pretty impressive reputation in sci-fi movies and with his recent appointment to direct The Batman he’s going to be getting yet more attention from the media, especially if his second Planet Of The Apes flick and the Justice League release goes well. Critics have been been pretty positive about the film and while our own review isn’t quite as glowing, it looks like it’s going to do well at the box office.

War For The Planet Of The Apes had a UK release date in cinemas on the 11th July 2017, which is a similar date to its arrival on the big screen in the US on the 14th. It’ll be screened in 2D and 3D with competition at the box office in the UK coming from Cars 3 and The Beguiled, which are out on the same weekend.

The film should be arriving on DVD, Blu-ray and digital download with a release date expected for November, based on previous release schedules.

With all-out war looming with the last remnants of humanity, Caesar and his band of apes rally to fight back against an army of humans led by an unrelenting and merciless Colonel. Having suffered devastating losses already, Caesar must look for a way to ensure the safety and continuation of his species, while also avenging the slaughter of the fallen.

The battle ground is set for a titanic battle between the two opposing forces and with the fate of the planet in the balance, it has set out to be the climactic culmination to the story.

War For The Planet Of The Apes trailer:

Andy Serkis has been back in the green room to portray Caesar and he’ll have Woody Harrelson (Triple 9) as him enemy, the Colonel. The cast also includes Karin Konoval back as Caesar’s orangutan advisor Maurice, Terry Notary (Kong: Skull Island) as Rocket Caesar’s right hand ape and Judy Greer (Ant-Man) as Caesar’s wife Cornelia, along with Steve Zahn as Bad Ape and newcomer Amiah Miller as their adopted human companion Nova.

War For The Planet Of The Apes has been given an age rating of 12A by the BBFC, with moderate violence and injury detail.

Matt Reeves has directed the third entry in the series having been at the helm for Dawn Of The Planet Of The Apes. Mary McLaglen, Jenno Topping, Mark Bomback, Peter Chernin, Dylan Clark, Rick Jaffa and Amanda Silver have produced the film. You can see more from the production on Matt Reeves’ Twitter page.

With two strong movies before it and a trailer that is as sharp and visceral as they come, we were expecting an impressive closer to the story in War For The Planet Of The Apes. Unfortunately, it doesn’t quite deliver the goods.

Andy Serkis is amazingly believable as Caesar and while Woody Harrelson is a solid addition to the cast, his character isn’t written or directed with as much skill as we’ve seen in the earlier films. Matt Reeves proved himself on Dawn Of The Planet Of The Apes, and his previous efforts on Cloverfield have also stood out well, but he hasn’t been able to craft the epic culmination to the origin story reboot that was needed.

It’s been a powerful take on the concept (first written by Pierre Boulle in his 1963 novel La Planète des Singes) up until now, but iconic movie appropriation, overly convoluted rationale and diminished credibility in parts beings our review down. The final chapter is worth watching, especially if you’ve seen both Rise Of The Planet Of The Apes and Dawn Of The Planet Of The Apes, but it’s not a stand-out success for us.

Read our full review at – www.tuppencemagazine.co.uk/war-for-the-planet-of-the-apes-review/

Share the War For The Planet Of The Apes UK release date, trailer and film details with: