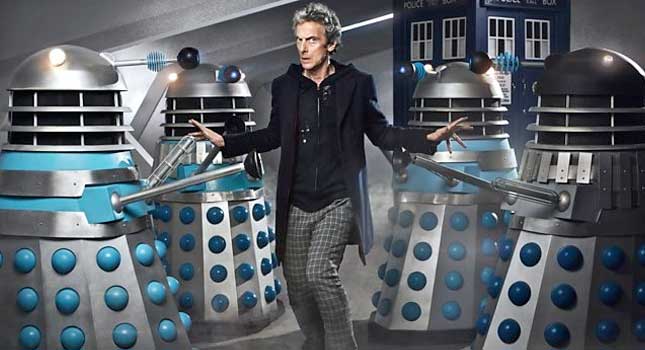 Following up on what we thought was a limited opening episode for Series 9, there was a lot of pressure on the second of the two-part story, The Witch’s Familiar, to bring things back from the brink a little, especially considering the reduced viewing figures compared to last year. While it does manage to do that a little, it isn’t enough to make us change our review of Series 9 all that much sadly, and the fact that the sonic screwdriver is out of the equation now only adds to our list of bug bears.

In all fairness to the viewing figures point, the fact that the Rugby World Cup is on at the moment does sort of cloud the situation slightly, so we’ll have to see how the series fairs once the Webb Ellis trophy has been handed out. However, The Witch’s Familiar did little to pick up the slack with just 3.71 million viewers on the night, which is the lowest it’s been since the sci-fi show made its comeback in 2005.

We really like Peter Capaldi in the role of The Doctor, but he hasn’t really been given the best two episode’s for the start of his second term at the helm of the TARDIS. The second episode may crank up the action and intensity somewhat, but it doesn’t take away the fact that Davros still looks like the mutated effluence from the Chernobyl femidom factory.

However, the storyline is improved a little along the way, especially with the twisted end-game move Davros pulls on the back of his impeding death and apparent repentance. We’re not massively convinced by the undead Dalek uprising counter twist if we’re honest, but the general gist does open up a fair few opportunities for future episodes and the power of the megalomaniac and his mechanical exterminators.

There’s also a little better interplay between the characters of The Doctor, Clara and Missy, with some funny setups and one-liners to look out for. Missy is put a bit more firmly in her place too, which is a better direction for the show in general. Michelle Gomez does a very good job of pulling off the nihilistic nutbag, but unless she’s met with an appropriate response it just flies in the face of The Doctor’s long-standing moral compass.

Overall, it wasn’t without its positives, with some decent special effects for Colony Sarff, a return for the silver and blue daleks and some cute scenes between The Doctor and Clara, so there’s still a lot of hope for the rest of Series 9. On the downside, the replacement of the sonic screwdriver for a pair of magical sun glasses doesn’t really work for us, especially as he now needs to waggle them to do anything. We’re big fans of wayfarer sunglasses, but not as a replacement for one of the best sci-fi devices in Doctor Who.

> Episode 3 – Under The Lake review