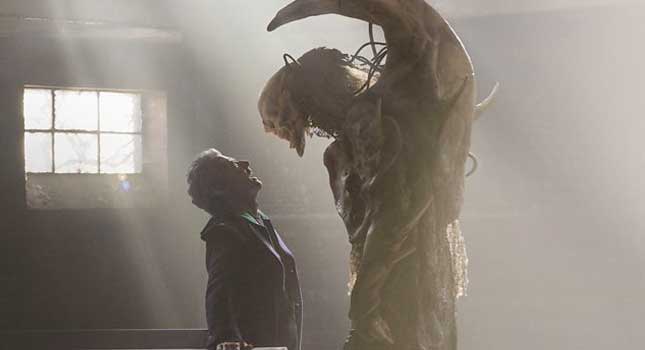 While it’s not quite as epic as the first half of the two part story, Before The Flood does a good job of tying it all together with a less than pretty little time loop, a big bad monster and some random chats to the audience. It gets a bit science theory workshop heavy at times, but when it gets back to the simple, effective genius of the ghost story that made Under The Lake such a great episode, it’s about as good as it gets at 8:30pm on a Saturday night.

We weren’t particularly enamoured by the first two episodes of Series 9, but now that we’re four episodes in it’s starting to look like there’s still a lot of potential to impress in the sci-fi classic. Peter Capaldi is irreverently the Doctor and though we’re still mourning the loss of the sonic screwdriver, the sonic shades weren’t as annoying as they were in Episode 2, so maybe it will go on to be a nice gimmick for a little while, like Matt Smith’s fish fingers, bow ties and fez.

Airing on the 10th October 2015, Before The Flood picks up the story where Under The Lake left off, with the Doctor back in time in an attempt to save Clara in the future from the electromagnetic beacon ghosts that have been attacking them in the underwater base they were trapped on. It’s teed up with a science lesson about the bootstrap paradox, which is a causal time loop where a future event works out to be the cause of an earlier event. If we’re being brutally honest, the science lesson of it all could have been delivered better than an out of story dismantling of the fourth wall.

Back in the 1980s, with references to the Cold War, the Doctor and three of the crew of the underwater facility, who he managed to escape with at the end of the previous episode, try to work out the mystery of the ghosts, which is classic mystery Who. Along the way they come face to face with a powerful monster called the Fisher King. Its got a sinister malevolence and it’s size is definitely intimidating, but there’s just not enough detail on the face and head carapace to make you think it’s anything other than a dude in a suit, a bit like a 1960s monster movie baddy, but a bit better.

The good news though is that the Fisher King’s mixed impact does little to take away from what is otherwise a faultless episode. It keeps you on a knife edge right the way through, and while you’ll undoubtedly think what eventually happens could be a possibility, it’s among a few that keep you second guessing.

Science is definitely back on the agenda for Doctor Who with the significant references to time travel theory in Episode 4, electromagnetic signals throughout the two part Fisher King story and the benefit of the Faraday Cage in Under The Lake. It may not be perfectly delivered in Before The Flood, but it’s definitely a welcome refocus and hopefully it’ll be a part of the rest of the series, tying in with the original Doctor Who‘s efforts around education.

Peter Capaldi and Jenna Coleman are both on good form and have great dialogue to accompany their performances with references of love feeling like shock-waves of meaning that appear destined to break every Doctor Who fan’s heart when Clara is written out later on in the series. It’s starting to feel like a momentous series from the BBC and Toby Whitehouse’s two part story has been a big part of the setup for everything that is still to come.

Doctor Who Series 9, Episode 4: Before The Flood review: 4/5

Share our review of Doctor Who Series 9, Episode 4: Before The Flood with:

< Episode 3 – Under The Lake review

> Episode 5 – The Girl Who Died review