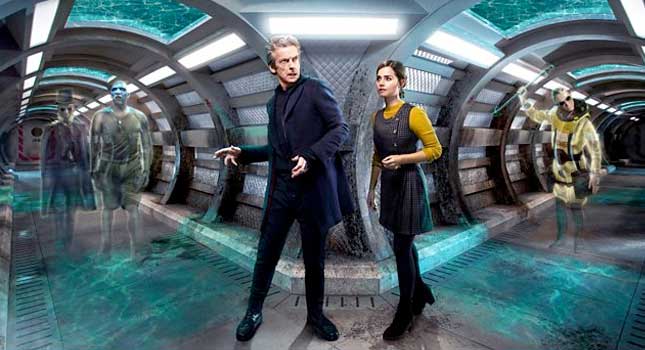 While both of the opening episodes of Doctor Who Series 9 failed to wow us, the good news is that The Doctor and Clara are back to their best in Episode 3: Under The Lake. It’s a classic ghost story with a futuristic twist, like Alien meets The Sixth Sense with a little underwater Abyss atmospherics thrown in for good measure, making it a thrill ride right the way through to the brilliant cliffhanger ending.

It starts out in an underwater facility in a reservoir in Scotland as the crew of the rig discover a strange alien spaceship scrawled with an unrecognisable script. There’s no pilot and some of the technology is missing out under the water. The mystery becomes even more mind messing when they get attacked by what looks like a pretty scary, hollow-eyed ghost. Luckily for them, The Doctor and Clara touch down in the TARDIS and they’re swept up in the spooky, sci-fi tale with the sinister ghostly ranks growing as they pick off the crew.

It makes for an enthralling episode to watch and because it’s a two part story, continuing with Episode 4: Before The Flood on Saturday the 10th October 2015 at 8:25pm, there’s more to come from the eerie adventure, making it a good prelude to Halloween later in the month. It doesn’t waste any time getting up to speed, with a rapidly descending setup and whirlwind inclusion for The Doctor from the moment he steps out of the TARDIS with an excitable Clara in toe.

Writer Toby Whitehouse has done a great job of injecting some excitement into Series 9 and if the first part of the story is anything to go by, the second and final installment the of the two-parter should be another classic outing. The preview trailer for Before The Flood, which was played at the end of Saturday night’s episode, looks impressive too and the fact that Peter Serafinowicz (Guardians Of The Galaxy) will be voicing a key character only adds to the potential.

Capaldi and Coleman are their usual dependable selves throughout Under The Lake and they’re supported by strong performances by the rest of the cast, Colin McFarlane, Sophie Stone, Zaqi Ismail, Morven Christie, Arsher Ali and Steven Robertson. They all help to wrachet the tension up as day turns to night and the ghostly spectors come out to hunt with their black eyes fixed ahead and their whispering lips chattering their looped message, “the dark, the sword, the forsaken, the temple”.

The special effects are a big part of why the episode is so convincing, with a great set, cool underwater shots of the facility and ghostly transparency for the attacking ghouls. It’s a big step up from The Magician’s Apprentice and The Witch’s Familiar, which was let down by more Davros plasticity and weird moving effluence that was meant to be the undying remains of Daleks throughout their history on Skaro. If this is what we’ve got to look forward to in the rest of the series then it’s going to be a great year for Doctor Who fans.

> Episode 4 – Before The Flood review