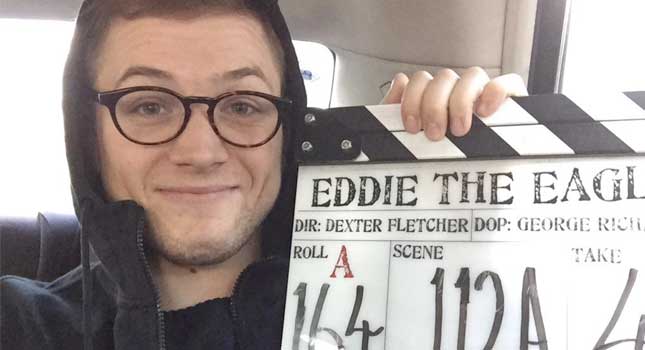 While Rupert Grint, AKA Ron Weasley from the Harry Potter films, had previously been associated with the lead role in the upcoming Eddie the Eagle film, the latest development is that it ended up going to relative newcomer, Taron Egerton, who you’ll recognise in the pic above from his recent starring role in The Kingsman: The Secret Service. It’s a pretty big move, and while it doesn’t exactly make him an overnight star, it does give him a chance to take on another new big role to prove his potential diversity on the big screen.

If you don’t know too much about the story of Eddie the Eagle, you can pretty much take the idea of Cool Runnings and cram it into a white, bespectacled Brit taking to the slopes in the Olympic ski jumping contest. While looking a lot like a contestant on Bullseye, he went on to be the British ski jumping record holder, as well as the stunt jumping world record holder with a whopping 6 buses. Sadly, though, he came last in the 70m and 90m ski jumping competitions at the 1988 Winter Olympics. For shame, but you can check out the video at the bottom of the page to see him in action for yourself. It’s class.

The Eddie the Eagle film was expected to land in spring 2016 when filming completed, so that should have given Taron enough time to try his hand at some more ski jumping with milk bottle bottoms for binoculars strapped over his eyes, which is pretty much what Eddie “The Eagle” Edwards did back in his day. It went on to be confirmed for a UK release date of the 1st April 2016, so it could be one of the  surprise hits during Easter.

The UK DVD release date is planned for the 8th August 2016, and the film will be available on Blu-ray and digital rental on the same date. It follows the earlier home entertainment release in the US on the 14th June 2016.

Egerton apparently also replaces Steve Coogan (Alan Partridge Movie) as The Eagle after an earlier cast reshuffle, so he’s got some pretty big boots to fill across the board. However, there’s more than enough of a new look for him in the film to not just come across as Eggsy doing an impression of Eddie the Eagle. Other cast members announced include Hugh Jackman (Pan), Mark Benton (Inside No. 9) and Ania Sowinski (Mr Nice).

The film has recently completed filming in Germany and Pinewood Studios with Taron calling a wrap in the picture above with scene 112. It’s been directed by Dexter Fletcher (Wild Bill), who you might recognise as Soap from Lock, Stock and Two Smocking Barrels or Cody in Layer Cake.

Refined details on the plot and a trailer are not available as of yet, so it’s hard to call how the Eddie The Eagle film is going to turn out at the moment. It could be a brilliantly funny equivalent to Cool Runnnings or a less intense variant of Foxcatcher, or maybe a hybrid of the two, so it’ll be interesting to see how it develops. With comments from Eddie to the BBC about the film implying that only 10-15% of it is actually based on his life, it puts a small shadow of doubt over the film, but as he hasn’t read the script or seen the movie yet the jury’s out for the time being.

Share the Eddie The Eagle film UK release date and DVD details with: 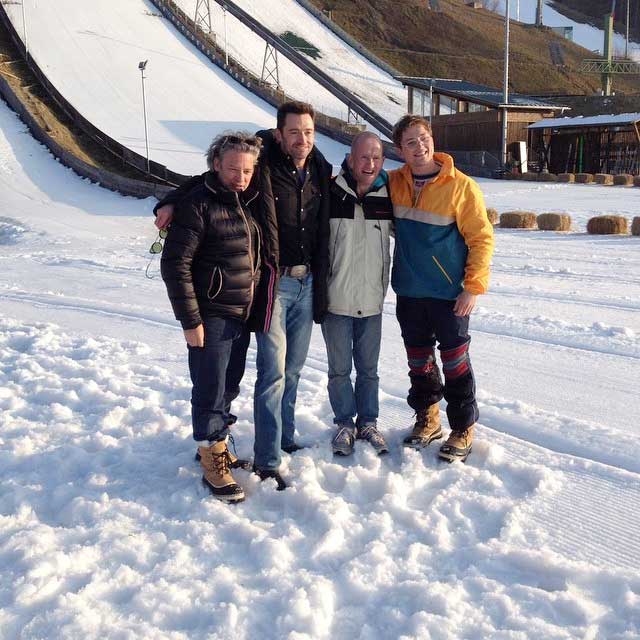 Director Dexter Fletcher with the legendary Eagle himself along with Hugh Jackman and Taron Egerton from the cast of the film. 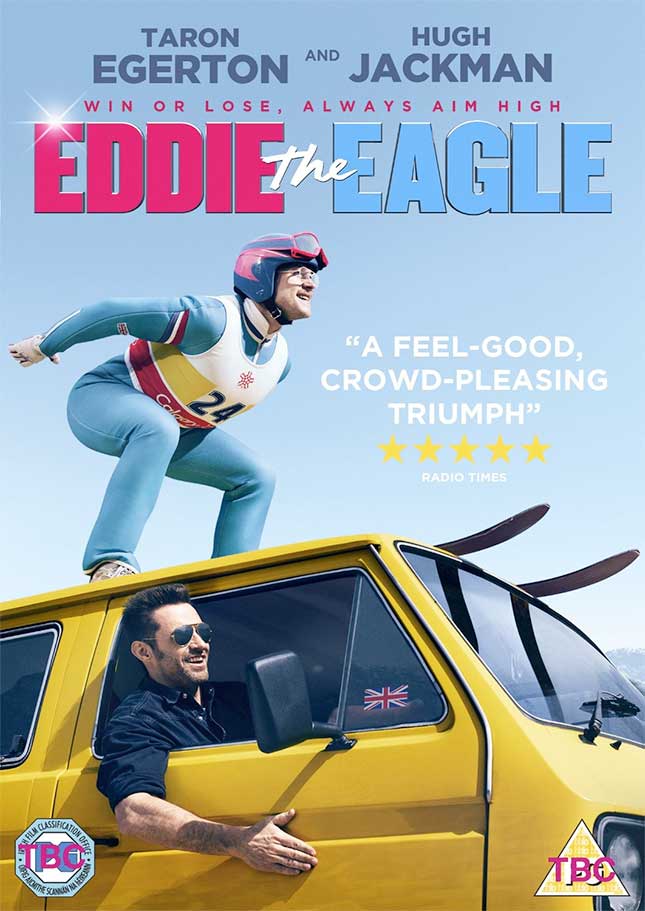 The Eddie The Eagle UK DVD front cover with Egerton looking every bit like Edwards back in the 80s.

Eddie “The Eagle” Edwards jumping in the 1988 Winter Olympic Games: